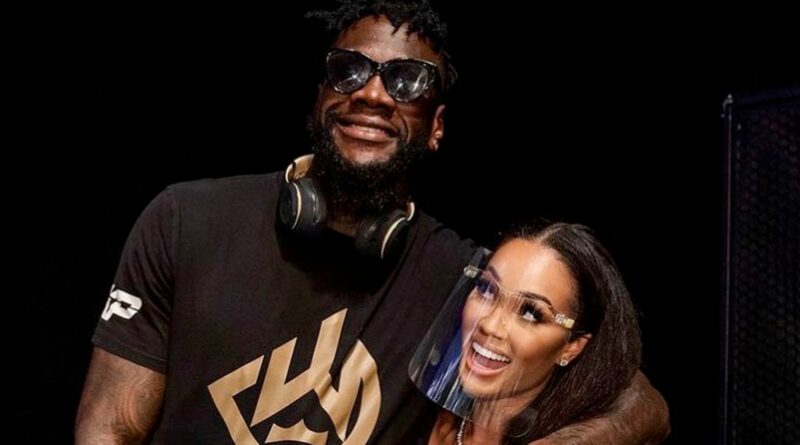 Telli Swift has accused Tyson Fury of ducking a fight with her fiance, Deontay Wilder, after the Gypsy King was forced out of their upcoming trilogy clash due to a positive test for COVID-19.

Fury was set to face Wilder in a highly anticipated trilogy bout later this month, scheduled for the T-Mobile Arena in Las Vegas.

The contest was set to take place almost a year-and-a-half on from Fury’s stunning seventh-round knockout of Wilder in their previous fight, and the Gypsy King was set to enter the trilogy clash as a heavy favourite.

However, on July 8 ESPN reported that multiple people in Fury’s camp had tested positive for COVID-19, including the current WBC heavyweight champion himself.

In a recent interview with TMZ, Swift, founder of the Boxing Wags Association, claimed that she thought that despite his positive test, Fury would still be able to fight if he wanted to.

"I just feel like with Covid and you have 16 days until the fight, he should still be able to fight and make it happen," Swift stated.

"I don’t think that he’s ready. I think he’s buying time, and I just feel like he feels Deontay is at the best looking-wise."

Do you think Tyson Fury is ducking Deontay Wilder? Let us know in the comments section below.

Despite his positive test, Fury has been seen at the Royal Exotic Cars Shop in Las Vegas and also took several photos with fans at a casino on July 14.

While it is unknown when the Gypsy King first tested positive for COVID-19, many have claimed he should still be in self-isolation, with fellow heavyweight Dillian Whyte one of Fury’s most outspoken critics.

“Tyson Fury is a w****r and a disgrace to British boxing if he has caught Covid-19 and gone around Las Vegas mixing with fans after cancelling the Deontay Wilder fight,” claimed the Body Snatcher.

“He talks s**t because when you have Covid-19 you are sick and you have to quarantine and instead he is walking around smiling, mixing and taking photos with people.

“Either he has got it or he hasn't – they said his mate and sparring partner Joseph Parker had it and the next minute he's out at a UFC fight denying it.

“There are videos and photos of him out and about, happy as Larry, just like he was when the Anthony Joshua fight got cancelled.

“The biggest fight in British boxing history was cancelled and he was laughing and joking about it. It is exactly the same now the Wilder fight has been cancelled because of him apparently having Covid.

“Loads of boxers are using Covid as an excuse to pull-out of fights or as a back-up excuse if they lose. These guys are irresponsible if they are using Covid when it is killing people and devastating families all over the world.”