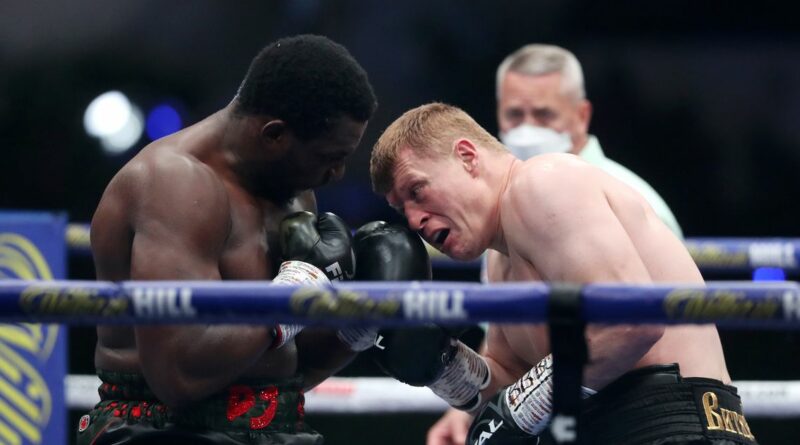 Dillian Whyte hit a major stumbling block on his path to world heavyweight glory when Alexander Povetkin detonated an explosive left uppercut to knock him out at Matchroom's Fight Camp back in August.

Whyte, 32, was only one win away from enforcing a long-awaited mandatory position with the WBC heading into his showdown with Povetkin, Russia's fearsome Olympic gold medallist and world-title challenger.

Yet with the carrot of potential mega-fights against Tyson Fury and Anthony Joshua dangling, the Brixton man's dream of reaching the heavyweight summit came crashing to a halt when, after flooring Povetkin twice in the fourth round, he was left in a heap on the canvas in the fifth.

It was a bitter pill to swallow for Whyte, who is now gearing up for a high-pressured rematch with 'Sasha' on March 6 while rivals Fury and Joshua prepare to meet in one of the biggest British fights of all time this summer.

However, he insists it didn't take long to process the defeat and begin plotting his route to redemption.

"I got over it straight away, it's heavyweight boxing," Whyte exclusively told Daily Star Sport.

"I'm a heavyweight, I knock a lot of people out. I hurt a lot of people in sparring and everyone I've fought has been hurt at some point or knocked down at some point. So I understand that one punch can change everything. It wasn't a massive shock, I was just disappointed because it shouldn't have happened.

"Obviously I wasn't happy with the way I fought. But listen, a lot of people sit and home and go, 'Oh my god this is a massive shock, it's this, it's that'. But it's two top guys in the world. It's not an amateur vs a professional.

"Also, I had seven amateur fights. Povetkin had 200 amateur fights. I never even won the ABAs and he was an Olympic gold medallist. Everyone was shocked but I was like relax man, this is heavyweight boxing. All the heavyweight champions before me have lost at some point. That's just the way it is."

Among Whyte's army of sceptics from the humbling defeat by Povetkin was Joshua, his arch-nemesis in both the amateur and professional ranks.

AJ, who avenged his amateur loss against Whyte by knocking him out as a pro in 2016, questioned his old foe's failure to "take Povetkin out" when he floored him twice in the fourth round.

"Does Dillian still have that instinct in him?' Because the fight was called maximum violence," the unified world heavyweight champion said on Sky Sports.

"When he had the opportunity to take him out, I wanted to see that maximum violence. That's why for me, when I smell blood, I go in there to take someone out, but sometimes you can get caught in the exchange."

Whyte, though, was quick to brush off that critique and retorted: "Joshua said that, but how comes he didn't jump on Andy Ruiz in the first fight?"

"Joshua says a lot of things and he doesn't do a lot of things. He could have also jumped on [Kubrat] Pulev a lot earlier in their recent fight. That's just what it is, this is heavyweight boxing. You have to be calculated and you can't take too many risks.

"Obviously Povetkin is a tough guy, very strong, dangerous guy, and you have to be careful."

Whyte and Povetkin's highly-anticipated rematch was initially set to take place on November 21, only for the latter to pull out when he tested positive for Covid-19.

Their second fight was expected to go ahead on January 30, but with the Russian taking longer than anticipated to recover from the virus that date soon became unfeasible. They will therefore lock horns on March 6 at a venue which remains unconfirmed.

The British Boxing Board of Control later suspended all boxing in January due to a rise in Covid-19 cases, too, meaning it could to have been held on UK shores anyway.

Nevertheless, Whyte doubts that his tormentor even tested positive in the first place.

"New Year's and Christmas is a big thing in Russia. I think he just wanted the time off to recover and spend time with his family. That's what I think.

"It's normal. He just had a new baby at the time, New Year's, Christmas and family time. It's a big thing in Russia and you don't want to be training and whatever. For me, I'm at war with the guy so I'm not gonna side with him and say I believe he was sick. If he was, then I'm wrong and I apologise."

Some have suggested the delay will actually benefit Whyte after what was a brutal one-punch knockout, but he doesn't agree.

"I don't need time to reflect," he said. "Reflect on what? Reflect on getting knocked out? No I don't.He was more hurt than I was in the fight. He got knocked down twice and he got beat up.

"I got hit with one clean shot and that was it. I was alright, I was fine."

Since his world-title hopes were dented back in August, Whyte's credentials as an elite-level heavyweight have been questioned like never before.

The Bodysnatcher has drawn criticism and ridicule from all angles after losing against Povetkin, with the highlight-reel knockout that left him flat out on the canvas replayed relentlessly on social media.

Another slip-up in the rematch could all but end his hopes of climbing to the top of the heavyweight mountain. Though Whyte is far from fazed by pressure from the outside as he awaits his date of destiny.

"People can say whatever they want man," he said.

"I won't be the first heavyweight in the world that has two losses or three losses on their record. It means nothing. Heavyweight boxing, one or two fights and you're back. One fight and I'm back where I was six months ago.

"In boxing, a lot of people just sit back and talk rubbish. These so-called 'experts' saying he should have done this or he should have done that, his career is over, these guys have never thrown a punch before in their lives. These guys don't have the warrior's mindset or what it takes. But I don't live my life worrying about other people."