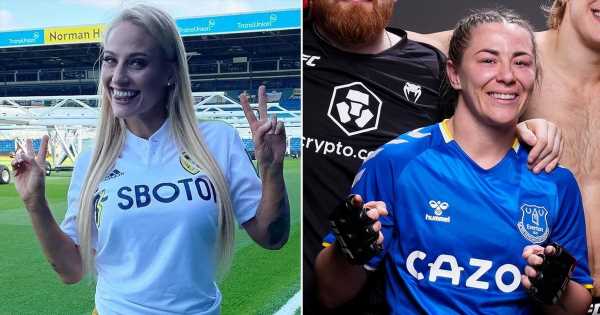 Ebanie Bridges has offered Molly McCann a chance to have it out in the ring following a football feud.

Ebanie Bridges, better known as The Blonde Bomber, was asked for an interview by Molly 'Meatball' McCann at Conor Benn’s victory over Chris van Heerden on Saturday night at the Manchester Arena. She was then asked about Leeds United with the Australian born fighter being an avid Leeds fan and didn't agree with Liverpool born Molly when she suggested Evertonians are a step above Leeds fans.

The 35-year-old fan was passionate about how she felt. She replied: "F*****g the best. [We're] the best fans." Although Molly stirred the pot by weighing in with her Everton opinions.

She asked: "They're not better than Evertonians though, are they?" This led to Ebanie asking if the 31-year-old Toffees fan wanted to settle the debate in the ring.

The Blonde Bomber replied: "We s**t on Evertonians." Molly quickly jumped in saying; "F**k off love". Ebanie then extended the offer to settle it in the ring. She said: "Oi, you wanna f*****g take it in the ring, alright?"

Do you think Meatball Molly and The Blonde Bomber should face off in the ring? Let us know in the comments section.

People were quick to take to social media following the video being shared by Kugan Cassius, cofounder of iFL TV, shared the video on Twitter. The pair also chimed in, with Molly tweeting: "Ebanie is actually a belter."

Ebanie replied to the video as well, tweeting: "Hahaha this is so good." @UFC21 tweeted: "Two people just living their best life."

Joshua vs Pulev: Live stream of Qais Ashfaq vs Ashley Lane on the undercard at The SSE Arena