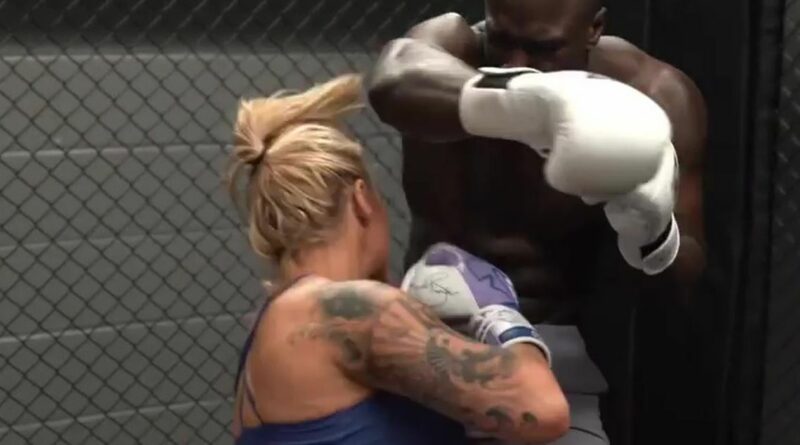 Ebanie Bridges ‘knocked out’ a male boxer in a playful skit before standing over him and calling him “pathetic”.

Bridges became the IBF female bantamweight champion last month after defeating Maria Cecilia Roman over ten rounds in a hard-fought contest. But it appears the Blonde Bomber is now utilising her talents elsewhere by sparking out Instagram comedians.

The hard-hitting boxer appeared in a skit on content creator Paul Olima’s page, where the latter posed as a big-headed boxing champion. In the short clip, Olima arrives for sparring where he was told by his coach that he would be facing Bridges in the ring.

After seeing the real-life champ awaiting him, a confused Olima scoffed: “What, a girl?”

The former footballer then squared up to fight Bridges and asked: “Are you ready? Are you sure?” with a grin on his face.

Would you be able to take a punch to the chin from the Blonde Bomber? Let us know in the comments section. Bridges proceeded to dodge the Insta celeb’s punches, before delivering a trademark left hook to the body and another to the face. Olima, who has doubled for Mario Balotelli, Anthony Joshua and Yaya Touré in the past, then feigned being knocked out flat on the ground.

The comedy cameo saw Bridges stand over her fallen victim while shaking her head in disapproval, before adding: "Pathetic."

Olima confirmed in the comments section that it was indeed a skit, but admitted the Australian boxer did not pull her punches, writing: "It was meant to be a skit…. You see how she couldn’t do 50%."

He also hit back at a fan who questioned the legitimacy of the blows, pointing them towards the outtakes which showed his gums bleeding and Bridges apologising

The influencer wrote: "Watch the outtakes man took trauma for the gram."

Joshua warns Whyte he will find it difficult against Povetkin