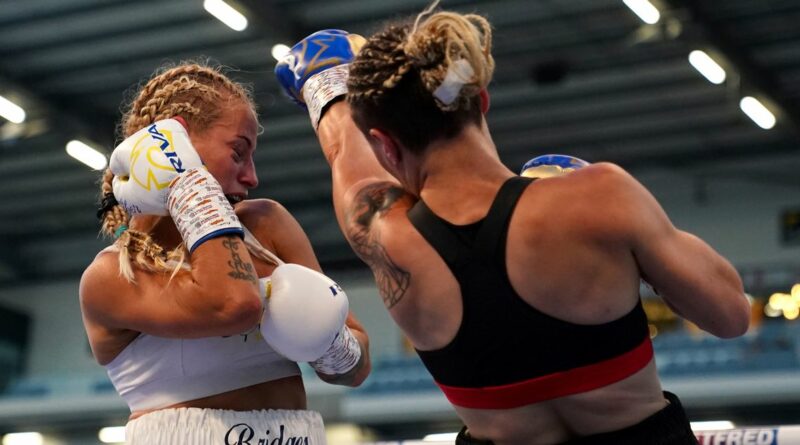 Ebanie Bridges may have secured the seventh win from her eighth professional bout in edging past Mailys Gangloff on Saturday evening – but she didn't come through unscathed.

The Blonde Bomber started the fight on the front foot, but wasn't as lively as the event reached its conclusion and appeared to be limited by damage to her right hand.

The 34-year-old, who has now won twice since losing to Shannon Courtenay back in April, has since offered an update on her condition and attended hospital on Sunday morning.

A common injury for professional boxers, her hand appeared severely swollen, but it might be worse than she hopes with a ringside doctor predicting broken bones. She said on Saturday evening: "Thanks to everyone that tuned in & all the fans that came to Leeds! Love you all I hope you enjoyed the fight!

And added on Instagram the following morning: "Let's see what the doc says."

While tagged in at a hospital and sharing a photo of her slightly less swollen knuckles.

The 34-year-old, from New South Wales, Australia, picked up another victory after the fight went the distance and the decision went to the referee.

Who do you think Ebanie Bridges should fight next? Give us your thoughts in the comments section

Steve Gray scored the bout 77-76 to the favourite, but fans had sympathy for Gangloff, who was brighter in the closing stages having won three of her last four outings.

Before the encounter, Ebanie wore her trademark lingerie at the weigh-in, with promoter Eddie Hearn admitting that he decided to look elsewhere with cameras watching his every move.

Speaking to Official Behind The Gloves, he said: "Anywhere the eyes look, there are cameras everywhere, do you know what I mean?

"So the best way to go about it is just to look somewhere else. Ebanie knows what she's doing. She's a tremendous fighter. Obviously a lot of people want to see her weigh-in as well.

"It is what it is, but for me, it's not about keeping composure, it's about making sure the camera doesn't catch me at a particular time where I might be looking somewhere that looks like I'm looking somewhere else.

"I'm respectful of that and I think I'll just find a spot at the back of the wall somewhere."

Tyson looking ripped ahead of return