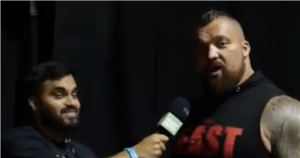 Eddie Hall insists he would have "100 per cent" been able to beat rival Thor Bjornsson one handed, but promoters wouldn't allow him to fight while injured.

Hall, 33, was due to finally settle his long-running feud with Thor, best known for playing The Mountain in award-winning TV series Game Of Thrones, in a boxing exhibition last month.

However, the former World's Strongest Man was forced to pull out of the fight after detaching his bicep, meaning it will now go ahead at some stage in 2022.

After the withdrawal, Thor instead took on arm-wrestling star Devon Larratt, stopping the last-minute opponent inside the first round of their clash out in Dubai. But Hall is adamant that he would have beaten the 32-year-old "one armed", claiming he offered to go ahead with the fight despite picking up an injury.

"I still wanted to fight Thor one armed," he told Sport Bible.

"And I'll say that openly right now, I would have thought Thor one armed. Promoters wouldn't let me.

Do you think Eddie Hall will beat Thor Bjornsson? Let us know in the comments section below. When asked if he watched Thor's win over Larratt, Hall said: "Yeah of course, me and my team watched that.

"Watching him train is pointless, but watching him fight is great because shows how he moves, it shows his technique, it shows what his strategy is gonna be, and we've got that in our book of boxing techniques now.

"We've got a plan to formulate, to go in and attack him, he hasn't got a clue what's coming to him. Not a clue.

"It's like a game of poker, he's shown me all of his cards and I've not shown him one of mine."

Hall and Thor's rearranged contest is expected to take place in March of next year. The latter recently branded his arch-nemesis a keyboard warrior, saying: "He's just all about talking s***.

"Being behind the screen, he's basically the biggest bully on the internet.

"He likes to be behind his computer talking crap. That's what he does best." 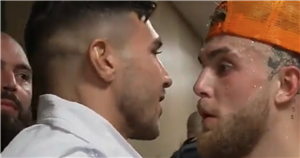