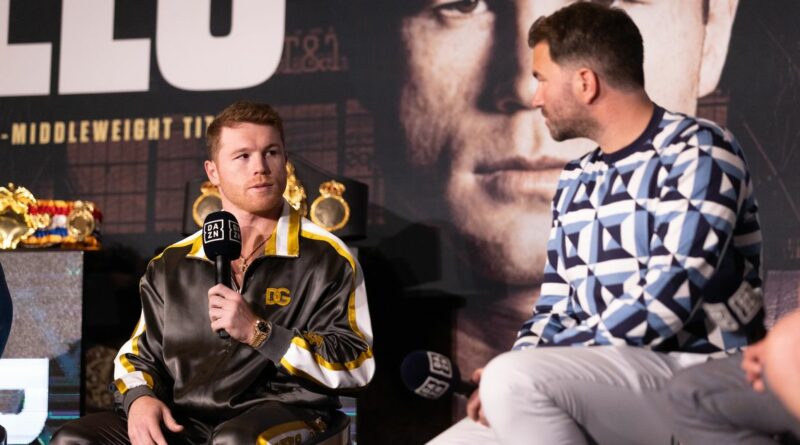 Eddie Hearn has said that Caleb Plant's involvement in a press conference brawl with Saul 'Canelo' Alvarez was "embarrassing" for the American.

And the Matchroom Boxing boss, who has worked with Alvarez for his last three fights, says that he feels the Mexican has come out the better of the physical exchange.

Hearn won't be directly involved in the massive undisputed super middleweight clash, but is still working with Alvarez and his team to make sure the event goes smoothly.

And speaking after watching the event, Hearn says that he felt the whole press conference was a "set-up" to make Plant look good ahead of the fight.

"It's difficult for me to criticize because I'm a Canelo and Eddy Reynoso fan boy," Hearn admitted to IFLTV. "But at the end of the day, Caleb Plant swung at him.

"I know Canelo pushed him, and I don't want to sound like too much of a fan boy but how cool was Canelo Alvarez?

"Firstly, the geezer's turned up looking the absolute nuts, secondly, a bloke's taken a swing at him, it's just an unbelievable slip counter, bang with a left hook.

"I think he went for the b****-slap with the right hand but I don't think it worked out for him."

Plant and Alvarez had an intense staredown in Las Vegas at their launch press conference, but things got physical when punches were thrown in a melee in front of the media.

Canelo and Plant first exchanged words in a heated interview, before the pound-for-pound king pushed his opponent during their face-off.

Plant then threw a punch at the unified champion, which sparked a furious brawl where Alvarez appeared to cut his opponent as further shots were landed.

"It was just embarrassing for Caleb Plant, to be honest with you, because he's gone everywhere," Hearn continued.

Who do you feel won the press conference, Canelo or Plant? Let us know in the comments section!

"And I actually felt that when they eventually sat down for the press conference, I felt like they were half ganging up on Canelo Alvarez.

"You had Brian Custer up there from Showtime up there reading out tweets that Caleb Plant had posted basically interrogating Canelo and Eddy Reynoso."

But Hearn believes that the whole event has just helped to better sell the fight, and make his fighter an even bigger star in the public's eyes.

"I think it just gave Canelo even more credit," he continued.

"He's just pitched up with Eddy Reynoso on a Caleb Plant and PBC promoted show, gave him a little tickle and then basically just dealt with the situation and moves on.

"It's a great build-up for the fight, I can't wait to be there, it's going to be really lively, but I felt that it was half a 'set-up' really in the way that they put questions to them.

"But I thought Canelo dealt with it fantastically well, I know Caleb's posted some pictures saying his fingers touched his face, but let's be honest he got absolutely owned."