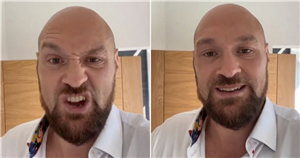 Boxing fans believe that Tyson Fury already has fight against Mahmoud Charr agreed for December, despite the heavyweight waiting for Anthony Joshua to sign a contract for their meeting.

An angry Fury posted a video on social media this morning blaming Joshua for the delay in agreeing their proposed December bout. He said: "That big body builder Joshua. He's had the contract for I don't know how long and ain't signing it. You do not want to fight. Your manager is a sausage, I've never seen anything like it.

"However, I will be fighting on December 3, if this sausage does not sign this contract which (I don't think he is going too)!"

Fans believe that Fury's social media video is all an act and that he's already agreed to face heavyweight Charr who knocked out Nikola Milačić in May.

Reacting to the video fans were unhappy and one Twitter user hopes that Charr knocks Fury out. He said: "As per usual, he was never gonna fight AJ. I know it absolutely won’t happen but if he does fight Charr next I hope Charr knocks Fury into next year, that would be the upset of the decade lol…"

German fighter Charr won the vacant WBA (Regular) heavyweight title against Alexander Ustinov in November 2017. However, in January 2021 the Germany was stripped of the world title because of his inactivity.

Charr, aged 37, has lost four bouts in his career including a technical knockout against Vitali Klitschko in 2012.

Another Twitter user was equally unimpressed by the prospect of Fury fighting Charr. They added: "Manuel Charr? As a champion? That’s embarrassing, even Wilder didn’t cherry pick competition this weak."

Fury's brother Shane Fury supported the theory earlier this week. In an interview with BetFred, he said: "If I had to put my money on it I'd say it's not happening [Anthony Joshua fight].

"It all boils down to if both men want it. Tyson is going to have a runout with someone, have a proper camp, proper sparring and get prepped for Usyk. He's going to be probably fighting Manuel Charr."

Fury also called out Oleksandr Usyk who he wants to fight in a unified heavyweight title bout. Fury added: "I'm afraid I'm going to put my first through the side of you, you little sausage."

UFC: Jimmy Crute opens up on mental battles and sleeping in a van