Floyd Mayweather has been challenged by AJ McKee, the latest MMA fighter who wants to cross over into the boxing ring.

McKee is undefeated at 18-0 as a Bellator MMA champion and, after a breakthrough performance at the weekend where he defeated Patricio ‘Pitbull’ Freire, he has called out Mayweather.

“I would have a lot of respect for him, straight up,” said McKee.

“I would just enjoy sharing that moment with him.

“Be careful because if you hurt my antique we’ve got a problem.” 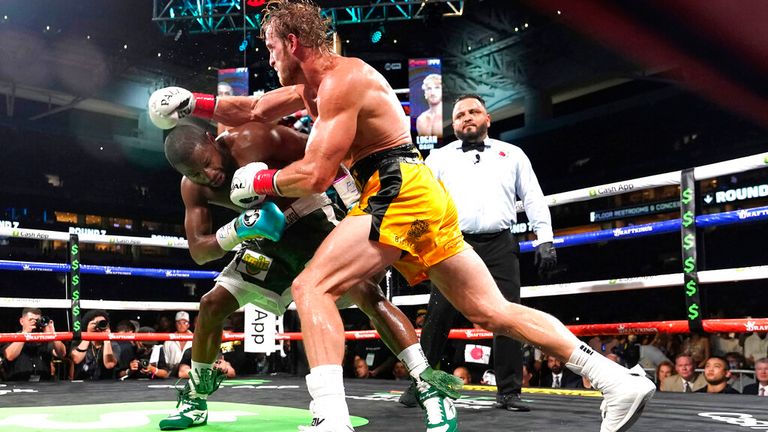 Mayweather ended his sensational career with a perfect 50-0 record in 2017 by beating the UFC’s biggest superstar, Conor McGregor.

He has since competed in exhibition bouts with kickboxer Tenshin Nasukawa and YouTuber-turned-boxer Logan Paul.

McKee aimed a thinly-veined dig at Logan and Jake Paul’s involvement in boxing.

“These younger guys who aren’t in the sport? They have something to prove,” McKee said.

“I don’t have anything to prove in boxing against Floyd.

“It’s just me wanting to be acknowledged as the best in my sport and sharing a moment with a great from another sport.

“Hopefully it happens one day.

“He told me that he doesn’t fight anymore. I said ‘cool’.

McKee had previously told Sky Sports: “I spoke to Floyd personally and he told me that he doesn’t fight.

“But he does exhibition matches!

“It’s a respect thing. He fights YouTubers. It’s a different level of respect that I carry.

“I wouldn’t go in there to knock his head off! I would go for sparring matches, to test my skills and to move around with a great.

“Stylistically I will be undefeated for my entire career. I will not lose.

“I will make that Floyd money too!

“Being undefeated, his work ethic, $100m per fight?

“I have taken the long journey like Floyd. I had no favours. I have taken everything progressively.

“In the near future we will see things change. If not for myself but for other fights.”