‘We don’t punch mascots, we just low kick them’: Tyson Fury pranked by one of his team in bear outfit after rival Deontay Wilder floored man dressed as a burrito on live television

Tyson Fury has poked fun at Deontay Wilder, by pretending to low kick a mascot, rather than punch one like the American did on live TV recently.

Wilder landed a fierce right punch on a man dressed as a burrito on US TV earlier this month, breaking his jaw in the process.

Fury and Wilder fight for the WBC heavyweight championship – a belt Wilder currently holds – in Los Angeles later this year and have been exchanging insults at regular intervals over the past few months.

But this was a more light-hearted dig from Team Fury, who interrupted a BT Sport interview to play the prank on Fury. 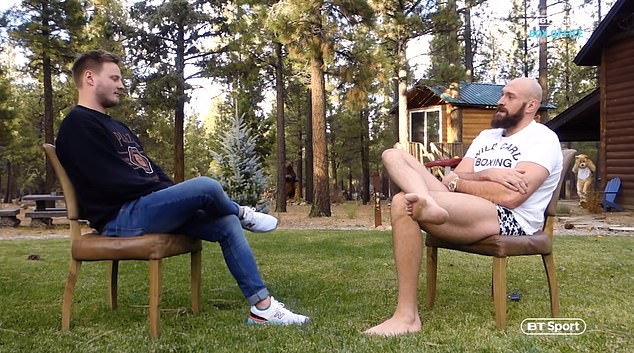 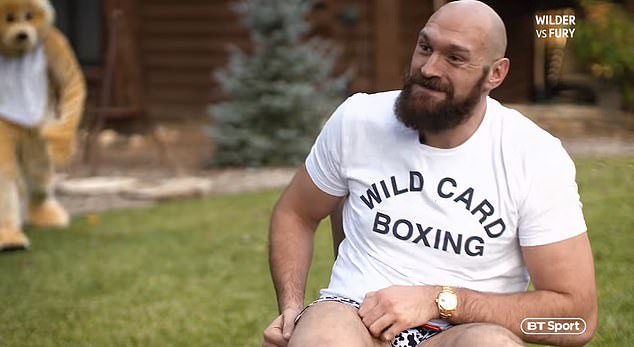 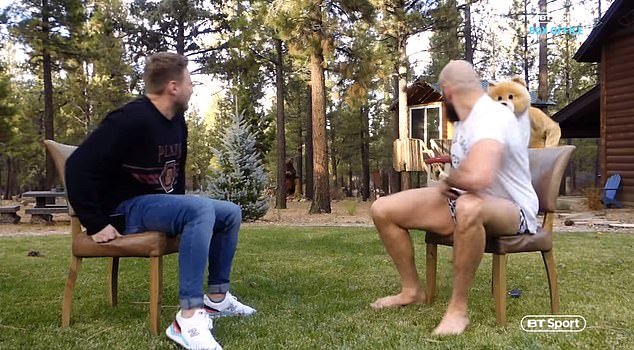 He is talking about fighting at York Hall and Madison Square Garden, which he calls ‘Meccas of boxing’, when one of his team appears around the corner dressed as a bear.

It takes a while for Fury to realise he is there, but when he does he turns round and pretends to low kick the member of his entourage, before saying: ‘we don’t punch mascots, we low kick them.’

Fury, the interviewer and the man in the costume are all in fits of laughter after the incident. 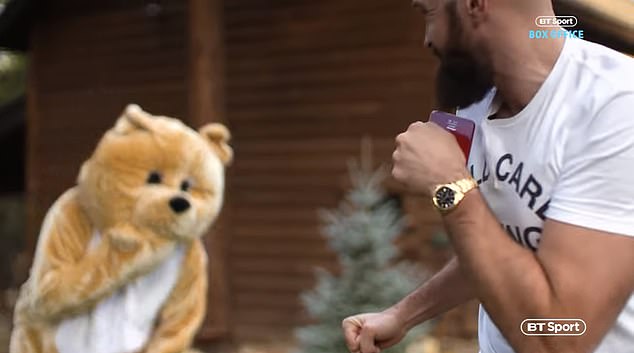 He gets up and prepares for action, clearly anticipating this is a prank from someone he knows 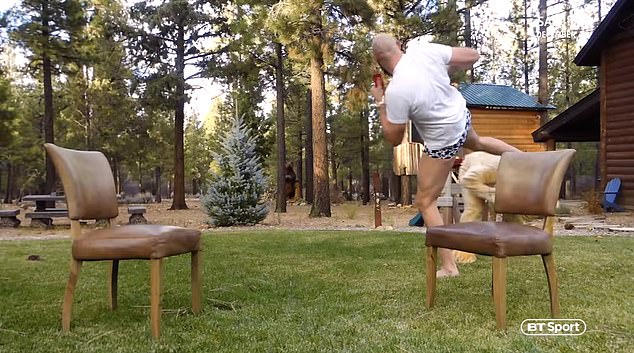 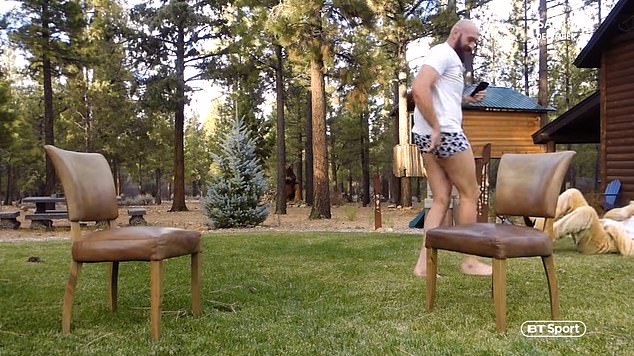 Fury, who is conducting the interview in a pair of boxer shorts, sees the man fall to the ground 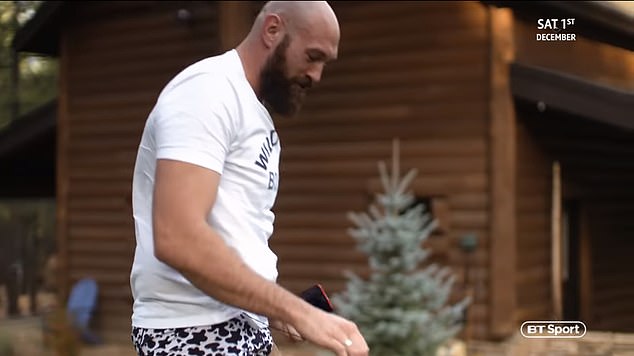 He then returns to his seat and has a dig at Deontay Wilder, saying: ‘we don’t punch mascots’ 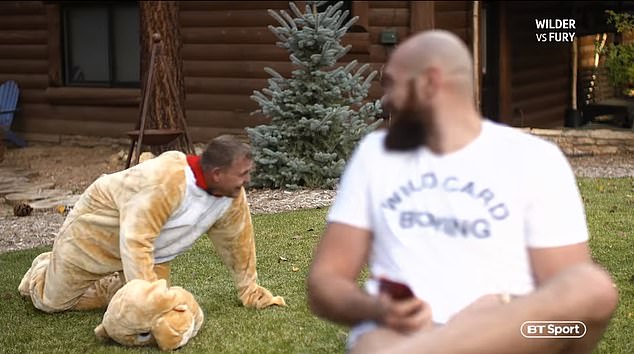 Belts on the line: WBC heavyweight

The controversial 30-year-old turns around and adds: ‘I thought it was a dog – a wild dog. You silly man.

‘Did you get that on camera? I’ll take a look at that in a minute.’

While this was all done in good humour, Fury and Wilder’s previous insults have been less tasteful.

Fury is undefeated in 27 fights and is looking to regain a world title, after relinquishing the WBA, WBO and IBO heavyweight titles as he was being investigated for drug use – he was eventually banned for two years. 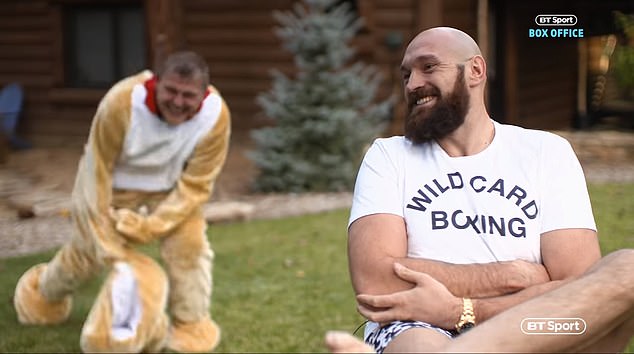 Fury then asks if the cameraman has recorded that, because he wants to watch it back 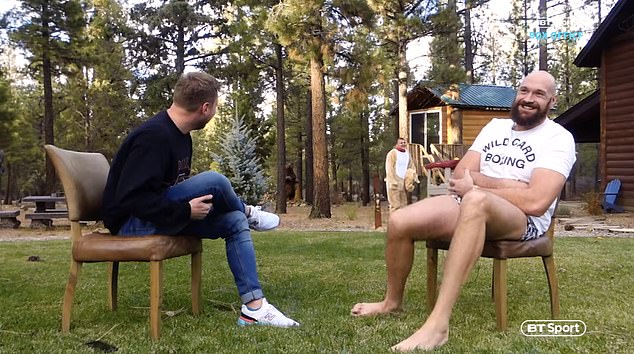 The interviewer returns to his seat as the mascot walks away, with everyone still giggling away 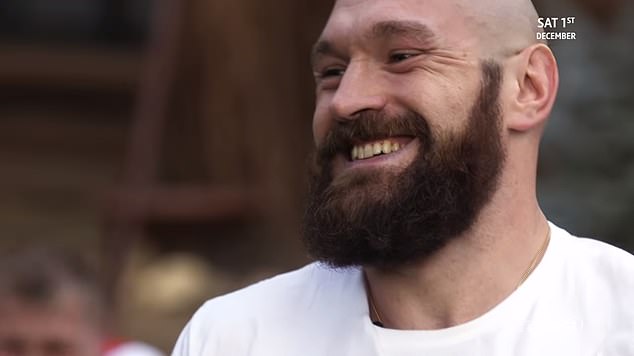 The duo clashed at their first pre-fight press conference four weeks ago and the verbal exchanges are expected to continue right up until the fight on December 2.

Wilder is also unbeaten and has said he will leave Fury’s body on the canvas when they meet.

‘It’s important to establish dominance. I’m the best, the baddest man on the planet,’ Wilder claimed. 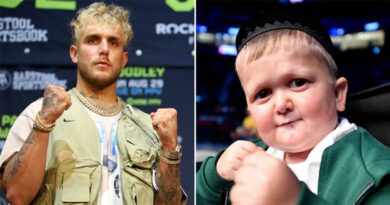 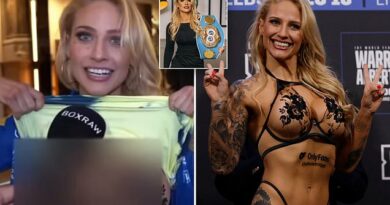