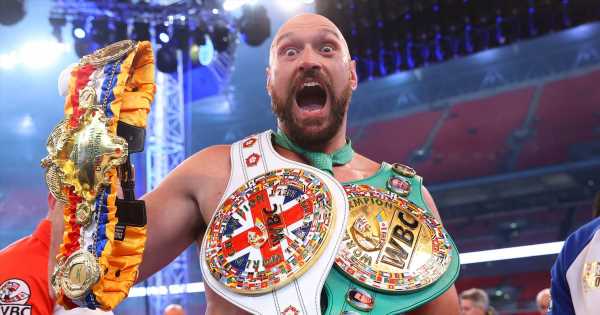 Bob Arum has stirred excitement among heavyweight boxing fans by claiming his fighter Tyson Fury will 'unretire' when the 'next big event' comes around. The Gypsy King was adamant he had contested his last bout after sending Dilian Whyte to the canvas in the sixth round in front of a raucous Wembley crowd back in April.

Many called for Mancunian to reverse his decision with blockbuster matchups against the likes of Anthony Joshua and Oleksandr Usyk still on the table. But the latest statement from Arum regarding Fury’s future will now be music to the ears of boxing fans worldwide.

During a chat with Fight Hype, the veteran promoter said: "Tyson Fury is retired and he will be retired until we come to him with the next big event and then he will unretire."

He then added: "Well, I think Fury is going to wait to see how the [Anthony] Joshua fight comes out with [Oleksandr] Usyk, and then he'll make a determination whether he wants to continue. Other than fighting the winner of Joshua-Usyk, there's really nothing that's really of interest to Tyson Fury, so we will have to see."

Despite Fury’s decision to hang up his gloves, he has yet to vacate his WBC Heavyweight championship title.

Following Fury’s last victory, WBC president Mauricio Sulaiman told Planet Sport: “There's no hurry to pressure him or his team into making any decisions. We will be in communication, he's having a holiday with his family."

Do you believe Tyson Fury will come out of retirement? Let us know in the comments section.

Anthony Joshua’s promoter Eddie Hearn on the other hand, has predicted a bout between Fury and AJ could take place at the end of the year. “I think you’ll see Joshua-Fury whatever happens, in all honesty," the promoter told his 1.2million Instagram followers last Tuesday.

"But hopefully we can see it for the undisputed world heavyweight championship in December.” In order for that to happen, 'AJ' would have to reclaim the IBF, WBO, and IBO and WBA (Super) heavyweight titles when he takes on Oleksandr Usyk in their upcoming rematch.

While it appeared the bout would be set to take place on July 23, the latest reports suggest the date now being targeted is August 20 in Saudi Arabia. The WBA, IBF and WBO heavyweight duel is close to being confirmed for the Jeddah Super Dome on that date.

Hearn had said: “There is the potential to be pushed back a couple of weeks. It’s being discussed, with both sides. I got a call last night with [Usyk promoter] Alex Krassyuk and [manager] Egis [Klimas] about it.

“There is so much to do you get to a stage where July 23 is seven weeks on Saturday and part of our obligation is to do a media tour.

“Is it more sensible to do a media tour and give it more time to do it properly? It is not that someone is injured, everyone is desperate to fight. Both want to fight again in December. Pushing it two or three weeks is OK but we don’t want to go any longer because then December goes."