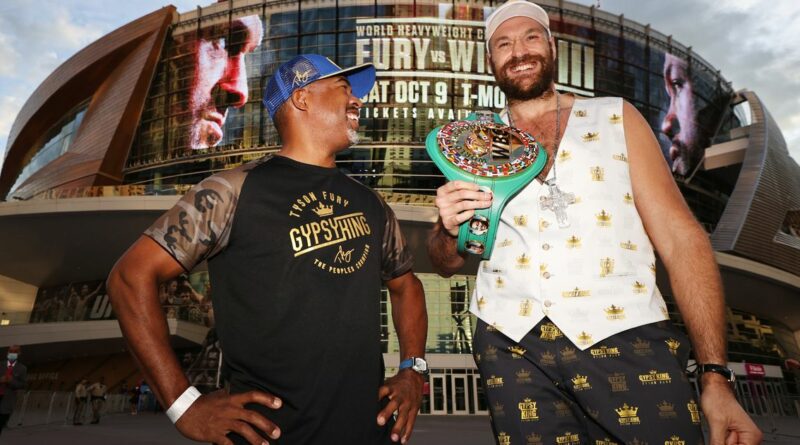 Tyson Fury’s trainer SugarHill Steward has confirmed the Gypsy King’s decision regarding his retirement from professional boxing. Fury said he was ready to call time on his career after defeating Dillian Whyte at Wembley Stadium last month.

Prior to his bout with Whyte, the 33-year-old had announced his intentions to retire from boxing, and Fury reiterated this point soon after his victory in London. Despite his claims many boxing fans believed the Gypsy King would not go through with the retirement plan, with a mouthwatering clash against the winner of Anthony Joshua and Oleksandr Usyk potentially to take place later this year.

However his trainer Steward had bad news for those hoping to see Fury fight again, after confirming his fighter is set to hang up his gloves to spend time with his family.

He told talkSPORT: “The latest I heard he’s retired and going on vacation with his family. I just spoke with him this morning before I came down here to talk with you guys. That’s the latest, hottest news.

“We can run and go and tell that. He’s on retirement and he’s going on vacation, spending time with the family.” Whilst Fury may well be set to retire from professional boxing, fans could well see him fight again in some capacity after stating his interest to fight UFC star Francis Ngannou in a boxing-MMA hybrid clash.

Fury and Ngannou appeared alongside each other in the ring following the former’s victory over Whyte in April. Whilst speaking to ESPN, the Gypsy King dragged the UFC heavyweight champion into the interview and revealed the pair were set to make up a ‘very special fight’.

Fury said: “This is going to be one very special fight, like never seen before in the history of our sport. We’re not talking two late guys at 140lbs. I’m at 170 [lbs] and he’s at 270 [lbs], so it is going to be an explosive fight when it happens.

Are you looking forward to see Fury take on Ngannou? Let us know in the comments section below

Questions were asked about the ruling of the fight, whether it would adopt a more MMA approach or boxing. Ngannou however was quick to inform the fighting world that he and Fury would battle it out in a hybrid clash with ‘MMA gloves’ in a boxing ‘ring’.

“It is going to be a hybrid fight with a different type of rules,” Ngannou commented, whilst Fury nodded in agreement. “You know, MMA gloves in a [boxing ring] ring, kind of like a mix up, a mix up of the rules. A little different.”

Fury vs AJ would be as big as 1966 World Cup final win, says Warren