Kid Galahad remembers the day his idol Prince Naseem Hamed told him how to get to the top of the sport. He just forgot to give him the directions.

Galahad, real name Barry Awad, was just 13 when he was messing around in a Sheffield gym and former world champion and British star Hamed walked in.

“I told him I wanted to be a world champion and he said: ‘If you want to be a champion like me you need to go and find a guy called Brendan Ingle’,” said Galahad.

“I went home and told my mum we had to go and find this guy. We drove around for an hour trying to find it because it is next to an old church and there is no sign for it.

“There were no Satnavs back then but we eventually found it, I went in and spoke to Brendan and he told me to come back at 6am the following day, the rest is history.”

This weekend Galahad can join that club when he faces IBF featherweight champion Josh Warrington.

Both men put their unbeaten records on the line at Leeds Arena on Saturday night.

And Galahad will hope to pull off an upset win in memory of Ingle, who died in May 2018.

“I grew up in from Toxteth in Liverpool and when I moved over to Sheffield, around 12, it was a big difference.

“I was getting up to things kids my age would never do and Brendan taught me right from wrong.

“The weekend we fight is the weekend of Brendan’s birthday so it would be a nice birthday present and tribute for him.”

Galahad, who served a drugs ban for an anabolic steroid in 2015, is of Yemeni descent but was born in Doha in 1990 as his father was serving in the Qatar Armed Forces at the time.

They moved to England when he was four and initially settled in Liverpool.

“I have nine brothers and sisters and when dad finished with the army they all came over here and I stayed with my grandparents until was four while mum and dad set everything up and then I came over,” said Galahad.

“We moved to Liverpool and we had a shop there. We had a three-bedroom house and they lived above the shop, it was my dad’s shop called Mo’s Grocery Store in Toxteth on Highpark Street next to a school called St Silas.

“There were 11 of us living in a three bed house but they were the good days when we all fight other stupid things and there were crazy things happening outside.

“When I was around six and seven, there were so many shootings and things going on in the area that I was never even allowed outside, we just to sit on our little doorstep and watch the gangs nick cars or whatever else they were doing.

“There was a pub across the road that was always lively with a fight or something else and we would just sit there and watch.”

But at 12 they moved to Sheffield and just 12 months later Galahad met Ingle.

Soon he wasn’t watching fighting across the road at a local pub, but doing it himself in the ring.

Now the journey can be completed against Yorkshire rival Warrington on Saturday night. 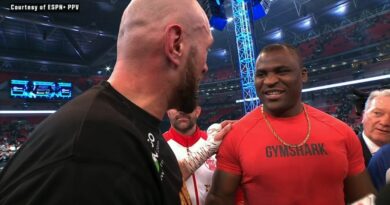