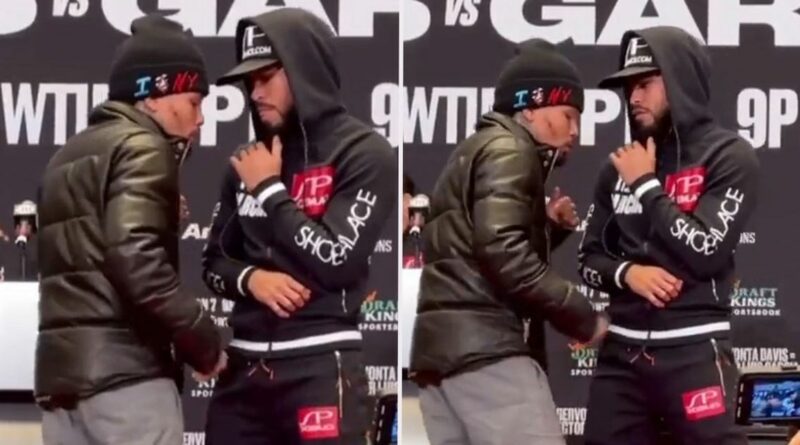 Gervonta Davis sported rather odd-looking behaviour during his face-off with Hector Garcia.

The WBA super featherweight champion will defend his title against the undefeated 28 year-old at the Capital One Arena in Washington on Saturday night. Davis, donning a black woolly hat and puffer jacket with denim jeans, stared down his next opponent and began to shadow box in what seemed like slow motion.

He even grabbed Garcia before the champ shoved him off, and pushed him away once again as he began to get closer. This bout is a great way to start the boxing year and with both fighters heading into their next match undefeated, something’s got to give.

After beating Chris Colbert last February, Hector earned a shot at the championship in August, and beat Roger Gutiérrez by unanimous decision to claim the crown. He will face his toughest test yet in the form of Davis, who has held multiple world championships in three weight classes.

However, the bout was thrown into some doubt as Davis was arrested late last month. TMZ Sports reported that the charge against him was one of domestic violence.

Which boxer will maintain their undefeated record? Let us know in the comments section below.

But the fight will go ahead as planned as allegations against the American were rescinded. In an interview with Fight Hub TV, Garcia responded to the news and spoke on remaining focused ahead of his first title defence.

“I try to stay positive knowing that sometimes things are out of your control," he said. "You don’t know why, but you have got to follow your path, I just kept focused and stayed training knowing that the fight would still happen. That was my mindset at the time.

"At this stage of the game, to worry about it being cancelled or not, what good was it going to do me? I had to stay focused and think that there was going to be a fight.

“Whether the fight happened or not, it was out of my control, but I also knew the possibility of the fight being cancelled. If it had been cancelled, then I would have fought somebody else in the future, so I didn’t worry about that.

“When you are a professional athlete like I am, you have to stay focussed, know that you have a gift and not let external noise affect you. I know that he is focussed, he is ready for the fight, regardless of what happened. So we will see who is the best on Saturday night.”

Is Floyd Mayweather vs Manny Pacquiao II on the cards?

Boxing news: Anthony Joshua reveals if he had panic attack ahead of Andy Ruiz Jr loss

Canelo Alvarez vs Daniel Jacobs prize money: How much is the purse for boxing mega fight?