Jake Paul has a lot of time for Australian boxers. Well, some of them at least.

He reckons newly crowned world champion George Kambosos jnr is going to be a “massive” name in the sport for years to come, and believes unbeaten Queenslander Liam Paro could soon trace his footsteps all the way to the top.

As for Quade Cooper … well, it’s not so much that Paul doesn’t have time for him, rather than he hasn’t actually heard of him. It turns out when the Wallabies star and part-time pugilist put his hand up to take on the YouTuber-turned-professional boxer a year ago, it never made it onto his radar.

“Yeah, I didn’t see that one,” Paul laughed, in an interview with the Herald and The Age. “I get called out like twice a week, three times a week these days.”

It’s a pretty long line of people who would like to cave Paul’s head in, or watch that happen. Cooper is somewhere towards the back, behind the likes of Tyson Fury, Conor McGregor and pretty much the entire boxing industry.

Paul, 24, is a human content machine who is revered by some but reviled by most. His videos have amassed more than seven billion views on YouTube, where he has 20 million-plus subscribers. For people of a certain vintage – say, 30 or younger – there are few more celebrities on this planet more famous than him or his older, slightly more controversial brother, Logan, who shares the same immature, undergraduate sense of humour and aesthetic. 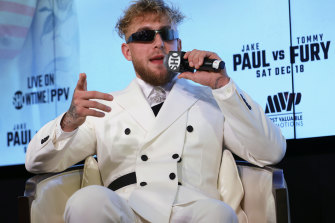 Three years ago, the Paul brothers set up an amateur fight night comprised almost entirely of fellow YouTubers. It made an estimated $US3.5 million in ticket sales and sold 1.3 million pay-per-views worldwide, making it the biggest non-professional card of all time. Most traditionalists hated it.

Then they turned pro. Logan fought Floyd Mayweather several months ago. It was an utter farce, but pay-per-view sales still cleared 1 million, which explains why so many fighters are happy to humour them: there’s serious cash to be made in monetising the hate.

BoxRec ranks Jake Paul (4-0) as the 654th-best cruiserweight in the world, but he’s one of the top 10 most Googled athletes this year in the United States. For those who have dedicated their entire lives to the sport, to see someone like him stroll in and cut straight to the top is demeaning and infuriating.

Paul, who once starred in a kids’ show on the Disney Channel, insists he’s taking his new vocation completely seriously, saying boxing gives him the perfect outlet to express himself physically, mentally and creatively. 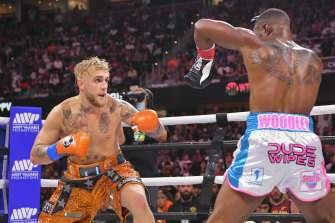 Jake Paul shapes up Tyron Woodley in their last fight on August 29. The rematch is coming up on December 18.Credit:Getty

“I’m a very hyperactive person … I have like crazy ADD, my brain’s constantly going. It helps a lot. I’m just trying to bring a different angle to the game and show people there’s a different way to play it,” he said.

“Change the sport – that’s what I want to do, for the better. Leave an impact, bring a whole entire new audience to the sport. I know there’s a lot of critics but once they see how serious I am about it, if they haven’t already, they’ll have to respect what it is that I’m doing. That’s all I can hope for.

“But it’s not about proving people wrong, it’s about proving myself right. What I mean by that is I know I’m good for the sport. I know I can become a world champion, and fight Canelo [the nickname of Saul Alvarez, widely seen as the best pound-for-pound fighter on the planet]. I know I could beat Conor McGregor.

“I’m just proving myself right because I know I can do and accomplish all these things. As I get deeper into it, I’m like, why not keep doing this? I’m already in shape, I’ve already got the skill, I already have the built-in promotion. If I wasn’t boxing I’m still going to work out every day, so …”

This weekend, he’ll face former UFC champion Tyron Woodley, who he beat via split decision in May and, as per a pre-fight agreement, had to get the words “I love Jake Paul” tattooed somewhere visible on his body. It’s now immortalised on his middle finger.

Paul was originally slated to take on Tommy Fury, who would have been the first actual boxer he’s faced, but the former Love Island contestant pulled out last week, citing illness – sparking a predictable war of words between the two camps. The last volley was an expletive-filled rant from Tyson Fury.

“I love it. It’s entertaining man. It’s entertainment. It just gives me more content,” Paul said. “It’s hard not to laugh at the guy, you know. Even though he’s talking s— to me, he’s funny. He’s like a big, giant teddy bear that just has a funny accent and it’s hard not to like him, to be honest. We may have our differences, but f— it. Who cares.”

Paro (21-0) is on the undercard of this Paul-Woodley rematch, hopeful that merely being adjacent to Paul’s mega-stardom can propel his own burgeoning career, even though they’re famous for very different reasons. “There’s a lot of buzz about Liam and the people he’s been sparring with, making his name in Vegas sparring against Devin Haney, Shakur Stevenson and all those guys,” Paul said. “It made perfect sense to have him on. I’ve always loved supporting the Aussies.”

Watching Kambosos upset Teofimo Lopez – another boxer who Paul has had “beef” with – has certainly lit a fire within Paul. He linked with Kambosos on a FaceTime call after he claimed the WBA, IBF and WBO lightweight belts last month in arguably the biggest result in Australian boxing history, which he says inspired him.

“A lot of people underestimated him coming in and I was sort of following the storylines all the way through and I was like, ‘I don’t know about this guy, he could probably take out Teofimo.’ And Teofimo and I had beef, so I wanted George to win, and he did, in a great way, a violent fashion. I just became a fan of him overnight.

“It’s definitely motivating. It makes me want to work harder, for sure, to have that moment, that shining moment where no-one can deny you. That’s why fighting is great because if you want it, the only person who can stop you from getting it is yourself.” 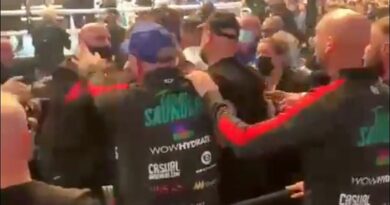