Tyson Fury climbed onto the stage in front of a huge crowd of fans after beating Deontay Wilder in Las Vegas to claim the WBC world heavyweight title.

Fury has made Sin City his home away from home in recent times, playing out his last three fights under the glitzy lights in the desert.

There is no better place on earth for a wild afterparty, something which Fury took full advantage of in the aftermath of this victory.

Fury emerged from the seven rounds relatively unscathed, meaning he could head straight to the party, while his opponent headed to hospital.

The newly-crowned champion made a beeline for the stage as he started chanting in front of a huge crowd of gathered fans.

In the video shared online, Fury can be seen taking to the podium dressed in a suit emblazoned with images of his imposing figure.

He was also draped in a union jack as he played up to the large travelling contingent of British fans.

Fury led chants as the packed crowd joined in, before he took photos with fans and celebrities alike.

One Direction star Liam Payne and DJ Steve Aoki provided the entertainment by performing on stage while Fury danced with his wife Paris, before the Gypsy King took to the microphone to serenade the crowd with the likes of Sweet Caroline.

The Briton produced a flawless performance on the road to beat the previously undefeated Wilder, 14 months on from their controversial draw.

Fury had vowed to take the fight to the American and did just that, flooring the champion twice and completely dominating the action before the towel came in from Wilder's corner to confirm Fury had won.

The conclusive nature of the victory cast doubt over the value of Wilder's rematch clause, with Anthony Joshua's promoter Eddie Hearn immediately suggesting a unification fight against Fury needs to happen.

But Fury believes the trilogy with Wilder is still very much on the cards.

"The spoils of war are fresh," he said. 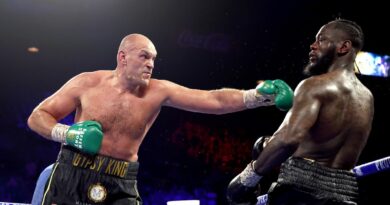