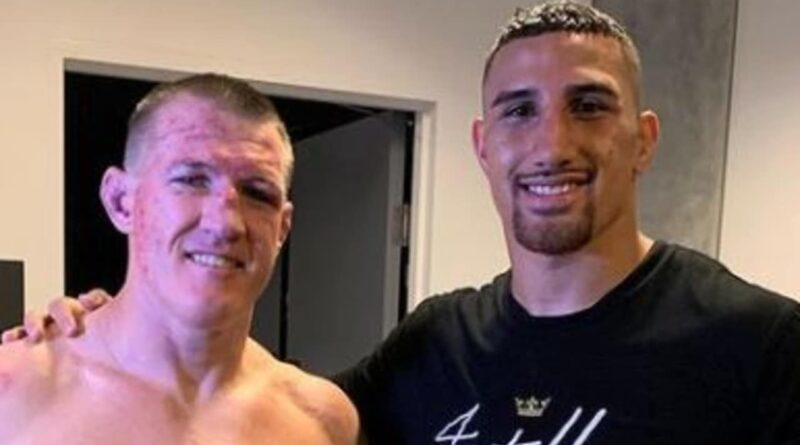 Ahead of the blockbuster bout at Sydney’s ICC Exhibition Centre, Gallen blasted his younger opponent in a series of fiery sprays, vowing to crush Huni’s dream of clinching Olympic gold in Tokyo.

The former NSW State of Origin captain made it abundantly clear he intended to hurt Huni by any means necessary.

He also called the 22-year-old a “f***ing coward” for withdrawing from the amateur world championship semi-finals in 2019.

“I’m here to do everything I can to make sure you don’t go to the Olympics,” Gallen told reporters at a press conference on Monday.

“Whether it’s break your jaw, break your face or break your arm, I don’t care what it is. I’m going to do everything I can to break something in you so you don’t go to the Olympics.

“That dream since you’ve been seven-years-old is going to be f***ed.

“I don’t care what the referee does. I’m going to try and ruin your dream.”

“Rocki you know what the most embarrassing thing is? A father looking to live their failed sporting career through their son so sit there and shut up,” Gallen said this week.

That was in addition to accusing Team Huni of being “disrespectful” to him for accepting another fight just a couple of weeks before their meeting.

Paul Gallen and Justis Huni at the weigh-in.Source:News Corp Australia

However, Gallen was utterly outclassed in the 10-round fight, with Huni extending his unbeaten professional record to five.

Despite all the verbal grenades thrown pre-fight, Gallen proved there were no hard feelings between the pair, posting an image on social media after the bout as he showed his class by visiting the winner’s dressing room to offer his congratulations.

Gallen captioned the snap: “Too good.”

Classy Gallen comes to Huni’s room and thanks him for the challenge. #HuniGallenpic.twitter.com/Qm4Wxdzgrh

Following Wednesday’s TKO defeat, the former Sharks skipper admitted his trash talk was only to hype up the event, and actually hopes Huni does well in Tokyo — despite what he may have said earlier.

“He was just too good, I wish him the best at the Olympics and I hope he can win a gold medal for Australia,” Gallen said.

“All the chat before, it was just chat.”

Speaking at Tuesday’s weigh-in, Gallen revealed what he really thought of Huni. “I genuinely want to see him do well, just not (on Wednesday night),” he said.

“I genuinely want to see him do well in the future, as I do with every one of these boxers on the card. I love boxing and I want to see them all do well.”

Gallen could pocket $1.5 million for Wednesday’s fight, depending on the number of pay-per-views sold.