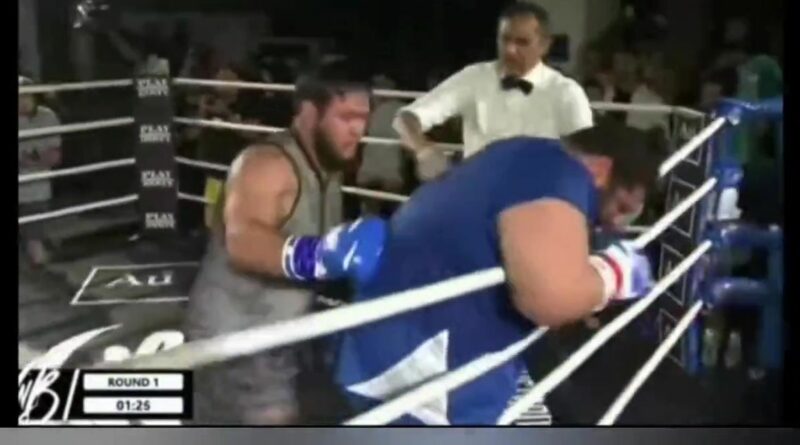 The Iranian Hulk was knocked out in the first round by the Kazakh Titan in a shambolic excuse of a fight that even saw the social media star trip over.

The two super-heavyweights were scheduled to go six rounds in Dubai on Sunday night to settle a brewing rivalry that had emerged on Twitter. After calls to finally meet in the ring, an agreement was reached last month with the duo meeting this Sunday in the Iranian Hulk's boxing debut.

However, the clash ended in farce with the Hulk – whose real name is Sajad Gharibi – ran out of gas seconds into the first round. Just a few punches from the Kazakh Titan had the Hulk wheezing around the ring and turning his back on his opponent.

READ MORE: Jake Paul and Hasim Rahman Jr get into war of words over reason for fight cancellation

It saw the referee call a timeout within the first minute while a return to action saw Gharibi attempt to get into the match. After a couple of throws, the Hulk was back to being out of breath – especially after being caught by one Titan punch.

The Kazakh international – real name Djumanov Almat Bakhytovich – dropped his nemesis with a right hand that saw the contest come to an end with the referee calling time on the circus act. The Hulk had been stumbling around before that, even falling over as he looked to draw closer to his foe.

There had been accusations on social media that Gharibi's outrageous physique had been digitally altered and there had been calls for the fighter to enter the ring topless. However, he resisted their demands and fought on in a t-shirt while the Titan also followed suit by competing in a vest, shorts and trainers.

Where the Iranian Hulk goes from here it remains to be seen having already insisted he wanted to reignite his feud with Martyn Ford. The two were set to meet in the ring prior to his clash against Bakhytovich.

But a series of suicidal tweets saw Ford call off the bout over fears of his opponent's mental health. "I said to the promoters not to put me face-to-face with him until we fight," Ford said during an appearance on the Disruptors podcast with Rob Moore. "Because I'm going to fight and I don't want to do that in a gym or whatever.

"So they put us face-to-face and it was a c***-up on the promotional side if I'm honest. It should never have happened, it was the wrong place, the wrong time, the wrong environment with no security and it was just stupid.

"Then the second face-off happened where he tried to take me down and that for me was when I started to become more concerned about the damage that would be done to him. It was very obvious and clear that there was never going to be a fair fight.

"After that, we were supposed to do a press conference and I saw him and he was crying, he was broke and he didn't want to go out, or fight, he didn't want to do anything. He was bad. He then put a post out on social media that he took down a few hours later on his stories saying that he wanted to kill himself."