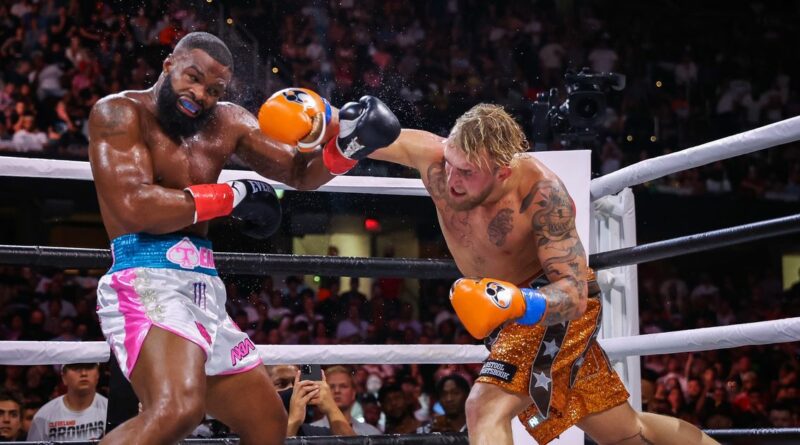 "He's a tough opponent," admitted Paul. "He's been fighting for 20 years, I've been doing this for three years.

"It was a tougher fight than I expected. All respect to Tyron; he's a hall of famer… he's a good boxer. There was a lot of s*** talk back and forth but this is a dream come true."

Paul had called out Woodley shortly after his win over Ben Askren in April and the Missouri native's release from the UFC ensured a swift conclusion to negotiations.

Woodley, 39, had reigned as the promotion's welterweight champion for five fights over two years but had lost his last four bouts in the cage.

Most recently he was submitted by Vicente Luque just weeks before Paul's win over Askren.

But he faced a considerable step-up in Woodley who had himself vowed that this would be the start of a second career.

Paul edged the opening round by virtue of his greater activity but both men appeared apprehensive.

Woodley was reluctant to let his hands go and when he did, his right sailed well wide of the target. Paul, meanwhile, was content to remain on the outside and control the bout with his jab.

Paul looked the more dangerous in the third session as he edged further clear on the scorecards.

But Woodley sprang from his stool for the start of the fourth round with a new-found sense of urgency. And he landed the best shot of the fight when he clipped Paul with a right hand which stunned the hometown favourite.

Paul was facing adversity for the first time in his short career and took until the final minute of the fifth stanza to recover.

The pace dropped in the sixth round as Paul began to tire – but it was he who landed the more telling blows.

Paul was visibly fatigued in the penultimate round but a right hand at the death may have sneaked him the session as Woodley was left needing a knockout.

He began the final three minutes as if he knew that – but Woodley struggled to close the distance and instead looked to land one big right hand.

He failed to do so and although he did enough to win the round before two of the three judges gave him the nod.

MMA fighter Taylor was much the smaller man and had boxed just once as a professional but proved a slippery enough to hear the final bell.

British heavyweight contender Daniel Dubois made a much bigger splash on his American debut with a demolition job on Joe Cusumano, dropping his rival three times in the first round before the fight was stopped.

And in the co-main event, Amanda Serrano retained her featherweight world titles with a points win over Yamileth Mercado by scores of 99-91, 98-92 and 97-93.

Deontay Wilder accuses Tyson Fury of being 'nervous' ahead of rematch