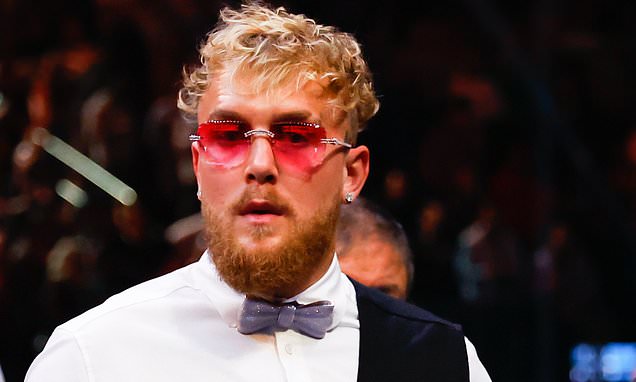 Jake Paul has vowed to show the world that he is a ‘bad motherf*****’ after confirming he will fight Hasim Rahman Jr following the cancellation of his planned grudge bout with Tommy Fury.

In a Tweet announcing the August 6 contest with Rahman Jr, the son of former world heavyweight champion Hasim Rahman and a former sparring partner of Paul’s, the YouTuber conceded his opponent was ‘bigger, stronger, more experienced and had greater knockout power’.

Rahman Jr represents a step up in class for Paul. The 31-year-old has a record of 12-1, having suffered his first defeat in April. 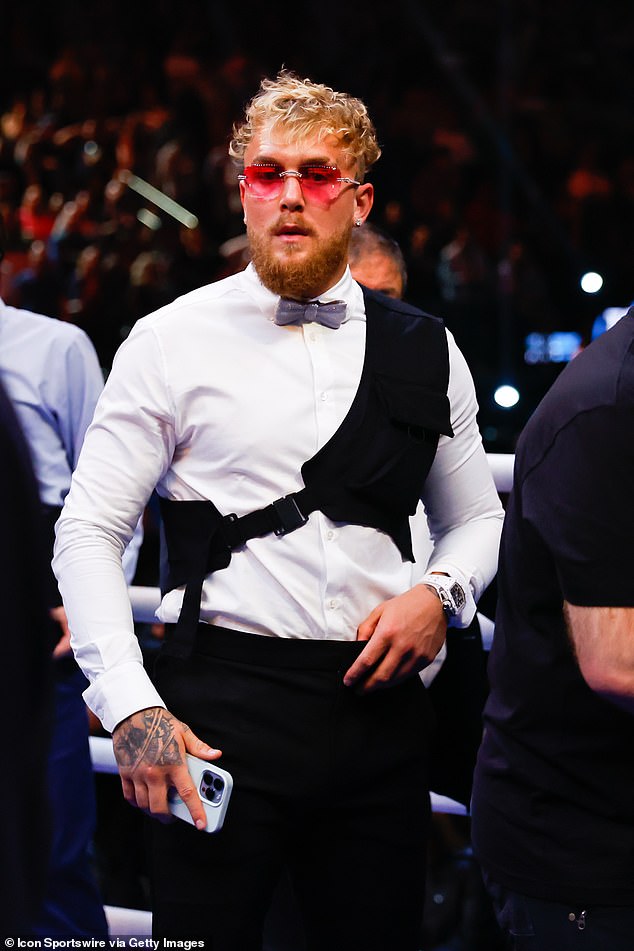 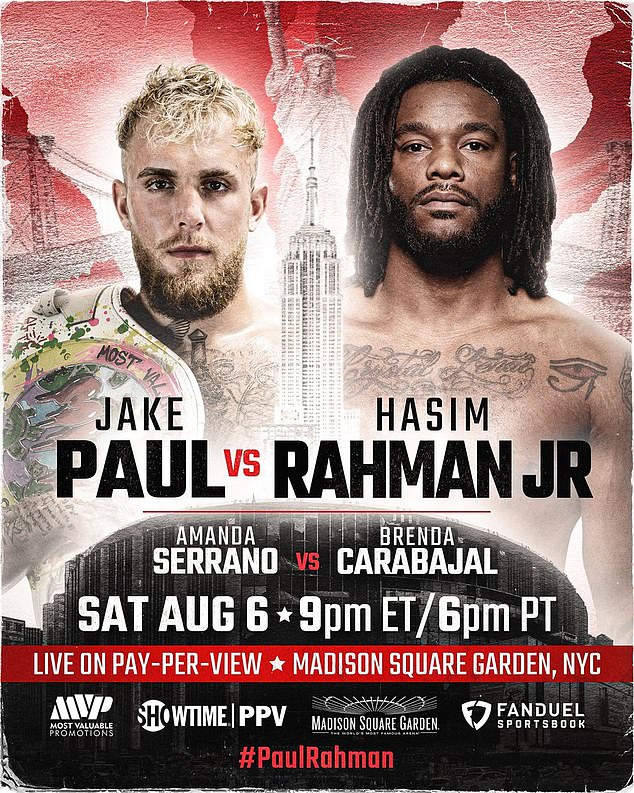 Fury – the brother of Tyson – was barred from travelling to the US due to his family’s close ties with wanted man Daniel Kinahan, with Paul accusing him of ‘going into hiding’ after failing to resolve the issue.

Paul had earlier said he was ‘moving on’ from Fury, but told him their fight is not dead in the water and he is willing to travel to England if Fury fights for less money.

Fury had responded to the fight’s cancellation on Twitter, saying he was ‘confident this fight will happen when this issue gets resolved and we come to a solution’.

‘I’m gutted and disappointed in regards to the issues I have faced with entry into the USA,’ Fury said. 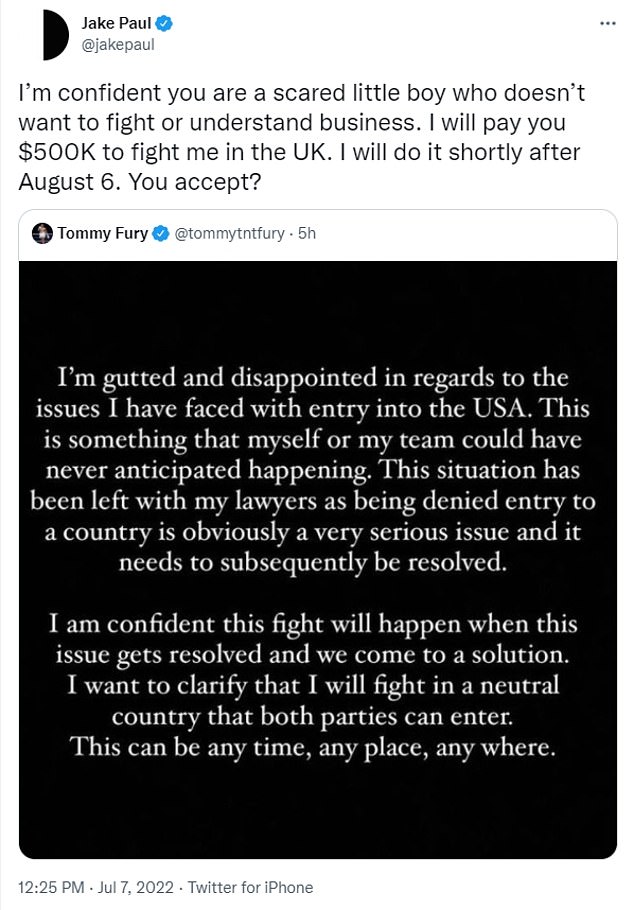 ‘This is something that myself or my team could have never anticipated happening. This situation has been left with my lawyers as being denied entry to a country is obviously a very serious issue and it needs to be subsequently resolved.

‘I am confident this fight will happen when this issue gets resolved and we come to a solution. I want to clarify that I will fight in a neutral country that both parties can enter. This can be any time, any place, any where.’

Paul retweeted his post, adding: ‘I’m confident you are a scared little boy who doesn’t want to fight or understand business. I will pay you $500K to fight me in the UK. I will do it shortly after August 6. You accept?’ 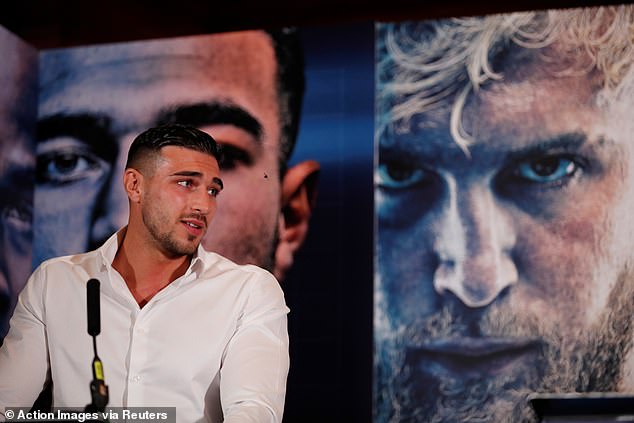 This repost irked Fury though who soon clapped back on social media by tweeting: ‘I wouldn’t get out of bed to fight you for $500k. Let me know when you’re ready to have a serious conversation.’

Previously Paul claimed Fury’s failure to address being barred from the United States was a tactic to lure him to the UK – which he said he would only visit for £12.5m.

He had blasted Fury for showing ‘no urgency’ to get the fight back on track and said their showdown was more lucrative in the States. 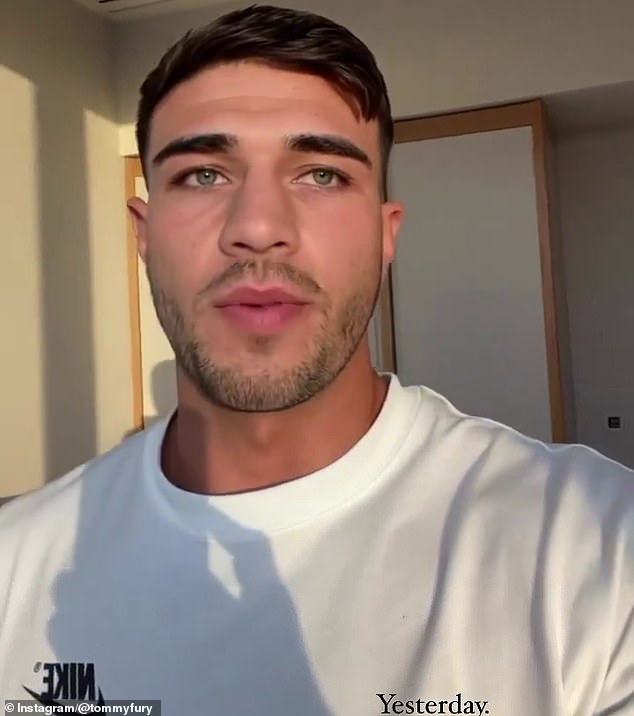 Fury was later forced to pull out of that fight in December due to a broken rib, leading to further verbal jabs from Paul, who dubbed him ‘Tommy Fumbles’.

Paul instead took on former UFC star Tyron Woodley for a second time and knocked him out in the sixth round.

The latest drama to hit this contest unfolded at the end of last month, when Fury was denied entry to the US as he was set to fly out for a press conference to promote their fight.

In response to the setback in their efforts to face each other, Paul furiously tweeted: ‘Tommy, no matter how hard you try to get out of this fight, I’m going to do everything in my power to not let you weasel your way out.

‘My team and my partners have made it clear the steps you need to take to solve your latest excuse. Take them or admit you’re a scared little b****.’ 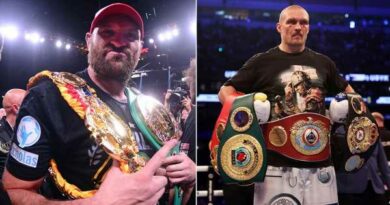