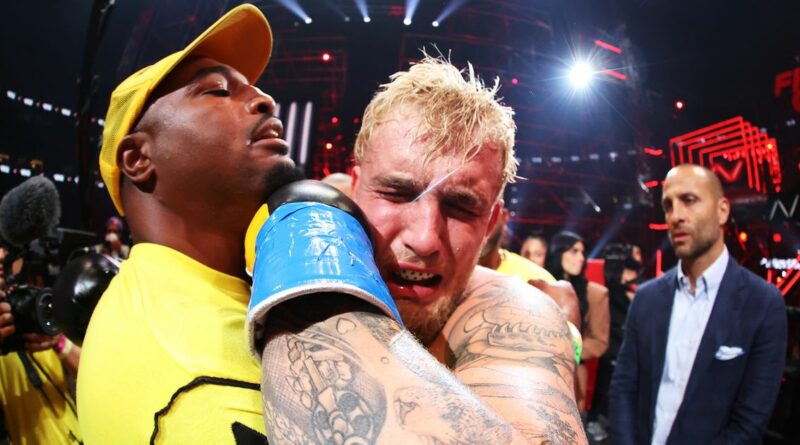 Jake Paul will be among the most interested of observers tonight when Conor McGregor takes on Dustin Poirier for a third time.

Having made his name on social media, the YouTube star turned professional boxer has made it something of his life's mission to lure McGregor into the ring.

Paul began his new career in the squared circle early last year when he stopped AnEsonGib in Miami before progressing to an appearance on the undercard of Mike Tyson's comeback fight against Roy Jones Jr.

Askren, an Olympic wrestler, was found lacking in the striking department and succumbed to a first-round stoppage to ensure Paul maintained his perfect record.

And while he is currently preparing for his clash with former UFC welterweight champion Tyron Woodley next month, it is a fight with McGregor which has long consumed Paul.

He ramped up his interest in fighting the former two-weight UFC champion last December while McGregor was preparing his rematch with Poirier.

Paul claimed to have sent proof of funds to McGregor's manager which showed he was serious about a $50million fight offer.

“I love all chickens, besides Conor McGregor. He is the world's biggest chicken," he said.

“Conor, you were just talking about me in the media saying, 'If it (fight between Jake Paul and Conor McGregor) makes money, it makes sense.

“I offered you $50m, you're getting paid $5m to fight Dustin Poirier. I think you're a chicken.

McGregor, as you would expect, declined to involve himself in the charade but was then knocked out by Poirier a little over a month later, prompting Paul to drastically change his offer.

"Hey guys, I got 10,000 dollars for you in cash! Cash baby! You had 50 million dollars!" he said after Poirier had stopped McGregor in the second round.

McGregor has only made passing comment about a potential fight with Paul, refusing to rule out a clash with either Jake or his elder brother Logan who recently took on Floyd Mayweather in an eight-round exhibition bout.

Accepting such a fight would serve as a reminder of how far McGregor's stock has fallen.

But should he lose to Poirier again tonight, the Irishman will not be blessed with options if he opts to continue his combat career.

A trilogy fight with rival Nate Diaz will always be on the shortlist but otherwise McGregor may be forced to give Paul a second glance – or retire.

One thing's for sure, the YouTube star will be among the first to react to the result of the trilogy fight.

What happens after that is anyone's guess.