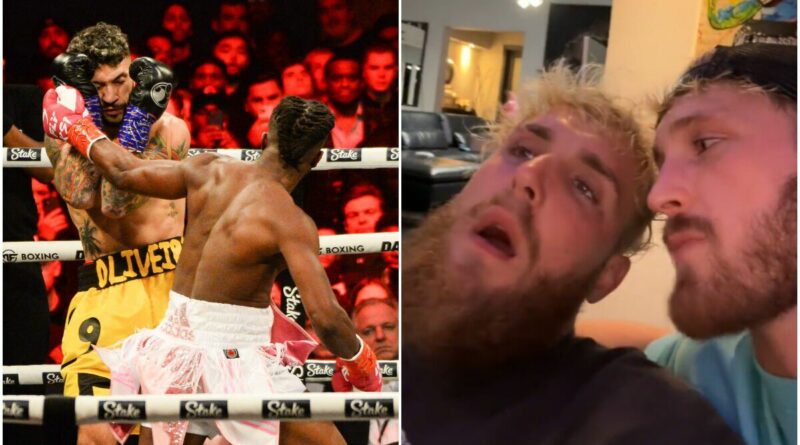 KSI could hardly have hoped for a better result in his return to the boxing ring Saturday, knocking out FaZe Temperrr in the first round of their duel at Wembley Arena. And bitter rival Jake Paul was similarly swift in his reply after the American was mentioned post-fight.

The Misfits Boxing 4 card came to a crashing crescendo as KSI tamed Temperrr with a savage left hook, collecting a key win for the Sidemen in their feud with FaZe Clan. But it didn’t take the 29-year-old long to turn his attention to the next target.

Mapping out his next steps, KSI said in the post-fight breakdown that he’ll seek “one more test before I reach that final level, that final point: Jake motherf*****g Paul!” His takedown of Temperr marked KSI’s third knockout win in as many exhibition bouts, having previously finished both rapper Swarmz and boxer Luis Alcaraz Pineda on the same night back in August.

Prime business partner Logan Paul uploaded a video of brother Jake reacting live to the call-out, asking his younger sibling: “What are you gonna do?” And ‘The Problem Child’ didn’t break from his blank expression as he answered: “I’m shivering with fear.”

Jake didn’t so much as acknowledge the camera as he attempted to sell his nonchalant attitude on the matter, having long feuded with KSI ahead of an expected showdown. Paul later tweeted he ‘loves when KSI wins because it gives him more confidence for him to actually get in the ring with me.’

It so happens KSI—real name Olajide ‘JJ’ Olatunji—already boasts one win over a member of the Paul pride. He drew against Logan in a six-round amateur contest back in August 2018 before upsetting the Ohio native when they met as ‘professionals’ one year later.

As for whom KSI might challenge in that ‘final test’ prior to facing the Problem Child, he mentioned Tyron Woodley and businessman Joe Fournier as possible targets. The younger of the Paul progeny beat former UFC welterweight champion Woodley twice in 2021, the second of which was decided with a brutal KO.

The 25-year-old has since returned to action with a unanimous-decision win over another member of UFC royalty, Anderson Silva, in October 2022. That result didn’t come without controversy, however, as the likes of Nate Diaz and Paddy Pimblett each suggested the result was ‘fixed’.

No such doubt has arisen in the wake of KSI’s latest victory over Temperrr, moving one step closer to that all-important date against his social media nemesis. Paul got back in the ring on the same night as he prepares for his next test, and it appears two of the biggest names in influencer boxing are on a collision course to face off in the near future.

David Allen opens up about boxing and mental health