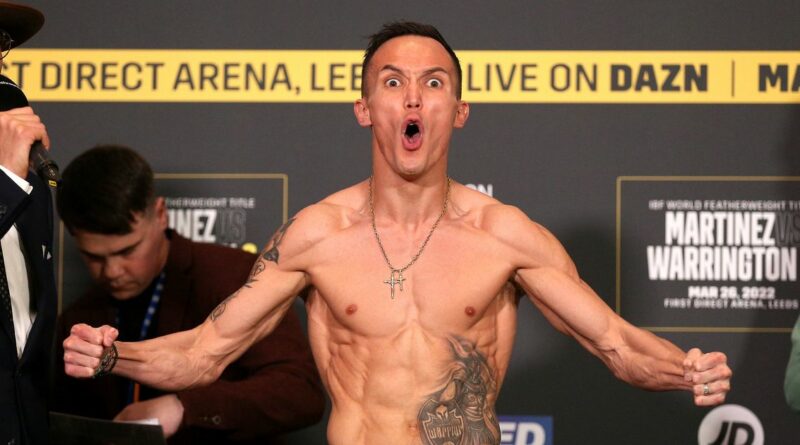 Josh Warrington has only ever left the ring twice without victory.

Both times he was missing something rather bizarre – his lucky eggs.

No, this is not some repeat of Cool Runnings where the egg is tucked somewhere you don’t want to know.

This is about how a long-time fan has given him half a dozen eggs a week before his last 18 victories.

The only time he didn’t pick them up since 2013 was when he got knocked out by Mauricio Lara and then his rematch with the Mexican ended in a technical draw after a nasty clash of heads caused a massive cut over his rival’s eyes.

So those in the Warrington business will be delighted to know an old superstition has been brought back ahead of this weekend's bid to become a two-time IBF featherweight champion against Kiko Martinez.

“Basically I’ve always dropped off tickets for people who have been coming for a long time and the Poole family have been coming since my town hall days when I was fighting for the English title in Leeds Town Hall,” said The Leeds Warrior.

“I’d say probably for the last six years since I’ve been going over, he gives me half a dozen eggs. It’s a bit of a tradition really.

“He swears the reason I got beat by Lara was because I didn’t go and get the eggs before that first fight.

“I was back up and the guy, Terry, who gives them to me, he’s at peace now. Because I’ve got the eggs, he’s confident I will be a two-time world champion.

“I couldn’t get them for the first Lara fight because it was in the [Covid-secure] bubble and there were no tickets being sold.

“I didn’t get them for the second fight either because I was so busy with everything else, I had my pals dropping the tickets off.”

How do you believe the fight will go? Let us know in the comments section.

Warrington will be hoping to tuck into a victory meal on Sunday morning with the eggs and with the IBF belt back in his possession.

He relinquished the title at the start of last year before he faced Lara and was then stunningly stopped in a huge shock.

The rematch then turned to disaster before an unlikely turn of events handed him another world title shot.

Wily veteran Martinez – who Warrington outpointed in 2017 – caused a huge upset by knocking out the Leeds man’s old foe Kid Galahad to get hold of the IBF belt.

Now the pair are set for a rematch at Leeds Arena.

If Warrington – who has 30 wins from 32 fights – suffers defeat against the 36-year-old Spaniard then it could be curtains for his career.

But if he wins back the world title then he might literally be riding off into the sunset in celebration – just without the retirement factor – having convinced wife Tasha to let him buy a motorbike.

“It’s been an itch that needed scratching since I was a 16-year-old lad,” he said.

“When I became world champion, I went to a motorbike garage and I came home with a brochure and the missus just burst into tears. She said you can’t, you’ve just become a dad.

“Then after the first Lara fight, I was sulking about and my dad was having a mid-life crisis and had just bought a scooter, so I thought I get a bike.

“The missus gave me the blessing and so I went and got one. I think she did it because I was so f*****g miserable!

“I realise the dangers of having a bike. I know if I hit a pole in my car, I will knacker my alloy. If I hit a pole on my bike, I’m coming off, so I ride defensively.

“When I’m on my bike, I absolutely love it.

“Whitby, Scarborough, that’s where I want to go. I can’t wait to get out on my bike next week.”

Dear everyone: Europe’s ‘The Final Countdown’ is not in ‘Rocky IV’

Anthony Joshua: Tyson Fury ‘should be looking to retire soon’ after near-12 year career