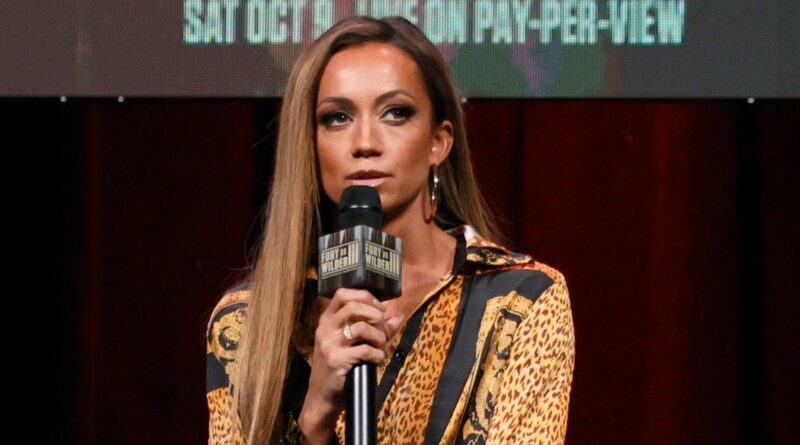 Kate Abdo has hit back at Bob Arum after he took aim at the British broadcaster following Tyson Fury and Deontay Wilder's press conference on Wednesday.

Arum directed a foul-mouth rant at Abdo, a former Sky Sports News presenter, for trying to arrange a face-off between the two fighters, shouting "f*** her" twice when asked about her hosting the event.

Abdo, 40, posted on Instagram the day after the row to give her side of the argument, insisting that the face-off was agreed upon before hand, something Arum was against taking place.

Abdo wrote on her Instagram story: "With regards to the faceoff – I was doing what we the broadcaster believed was agreed upon. But I think that's kind of unimportant now.

"I have nothing but respect for Bob Arum and the empire he has created. I understand what he means to boxing and what this sport owes him. I think the language in his interview was entirely inappropriate.

"Of course it's disappointing to be disrespected by someone I respect but that's life, not everyone will give you the courtesy you deserve."

Arum's temper ignited during the press conference when Fury and Wilder, who have gone nose-to-nose with each other in the past, were preparing to face-off once again after Abdo suggested so.

But the British presenter soon backtracked and said: "No, I apologise, we're not going to do it, no. Bob Arum says no."

Arum was heard shouting from the audience: "Not a good idea!"

He was then caught on camera making a harsh expletive-laden rant about Abdo after the press conference had finished.

"They bring this woman in from the UK and she's slanting all the press conference to Wilder,' Arum complained. "Like I don't give a damn, but it's obvious what she was doing!

"And then, she knew that the understanding was: no face-off. Tom Brown argued with Fox, no face-off. We said, "No face-off". What does she say? "Now we're going to do a face-off?"

Abdo will be a familiar face to British viewers, having appeared as a presenter on Sky Sports News, pay-per-view boxing coverage, European football and other events.