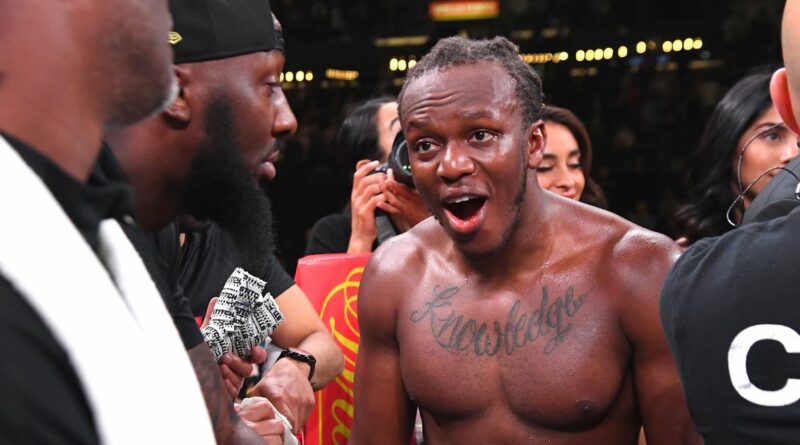 KSI has branded fellow YouTuber-turned-boxer Jake Paul a 'c***' in front of the American's brother Logan.

KSI has had bad blood with the Paul family in the past, but primarily with older brother Logan after the pair met twice in the boxing ring, with the Englishman taking victory in the second bout after drawing the first.

However, it appears the pair have now put their differences aside after teaming up to launch an energy drink, but the same feeling can't be said for the American's younger brother Jake.

Whilst appearing on Logan's podcast 'Impaulsive', KSI aimed a huge jibe at his former rival's brother, and even branded him a 'c***' whilst the American watched on.

Despite the Englishman’s harsh words, his business partner Logan looked unsurprised and unoffended about the comments regarding his brother.

Whilst KSI revealed his pure hatred for the 24-year-old, he did have some praise for Paul's rise in the boxing world, after he brutally knocked out former UFC champion Tyron Woodley last month – his second victory over him.

Should KSI return to the ring? Let us know in the comments section.

"People are saying it's fake, it’s not fake, he cleaned him out and it was a great shot.

Of course this is not the first time KSI has had animosity with the Paul family, having shared an ongoing battle with two-time opponent Logan for some time.

However their bad blood is now behind them, and the Englishman did reveal this could be the case with younger sibling Jake, when he beats him in the boxing ring – dropping a big hint at his potential return.

When asked about potentially making up, KSI laughed and replied: "I think maybe when I beat him, yeah.

"The thing is everybody is always going 'shut the f*** up KSI you haven't been in a ring for so long, you're not going to be able to beat Jake Paul. Look at Jake Paul.;

"But then I'll go styles make fights. If you find a certain person that Jake is just horrible against, and has less experience than Jake he is still going to beat Jake because he knows what works against Jake… It’s a different style."

Anthony Joshua has redemption – now he can strive for greatness