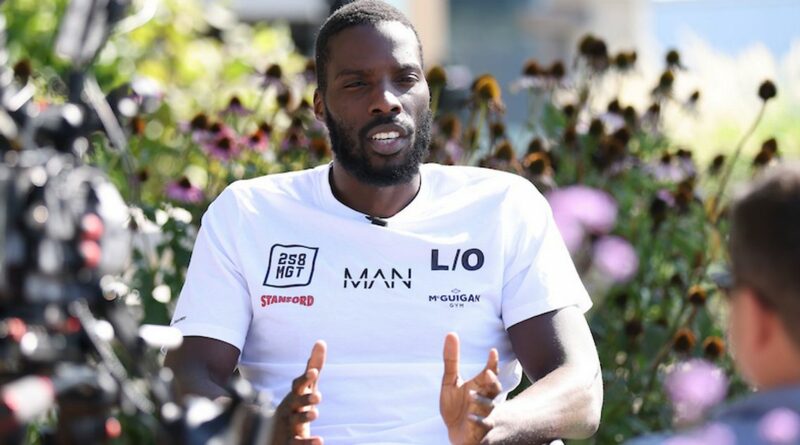 To the untrained eye Lawrence Okolie's three-round demolition of Dilan Prasovic was a smooth, efficient and gratifying night's work.

Okolie, the new world cruiserweight champion making the first defence of his WBO title, only needed eight minutes to see off Prasovic, a suspiciously outranked mandatory challenger, in front of almost 70,000 spectators at the Tottenham Hotspur Stadium.

Yet, it speaks volumes about the doggedness of the 28-year-old, the desire to reach the zenith of his craft, that both he and meticulous trainer Shane McGuigan were not entirely satisfied with the display.

"There's little things between the two of us that we know need to be changed," Okolie tells Daily Star Sport.

"It was a good performance in everyone else's estimations. In mine it was alright. I'm happy I got the knockout and I'm blessed.

"But there are little technical things that I know I could have done better, little tactical things."

While his self-deprecation in pursuit of improvement is understandable, Okolie was still impressive on the night; demonstrating the gulf in class between himself and Prasovic in the chief-support bout before Anthony Joshua and Oleksandr Usyk's heavyweight humdinger.

The beaten challenger was evidently out of his depth from the very first bell. Quite frankly, he should not have been sharing the ring with a fighter of Okolie's ilk.

So is there much the latter could have learned from such a straightforward victory?

"Yeah of course," Okolie insists. "More so about myself than the opponent.

"How was making weight? How was the occasion of fighting in front of 70,000 fans? How was defending your world title and going through that mental battle? "There was lots of stuff that was more so about myself and learning. What could I have done differently in training to get it done in one round instead of three rounds?

At 28 Okolie has already blitzed his way into a position most fighters merely dream of; world title in the bag, one successful defence under his belt and a potential blockbuster with a fellow champion coming next.

The sky certainly feels like the limit right now.

"I think one day I'll look back and say these were the greatest days of my life at the time," he gushes.

After capturing the WBO strap at an empty Wembley Arena back in March, when he outclassed and overwhelmed the experienced Krzysztof Glowacki, it was somewhat fitting that Okolie's maiden defence played out as the atmosphere reached fever pitch in north London ahead of Joshua vs Usyk.

Unlike his AJBXNG mentor, who was beaten conclusively by a masterful Usyk, he made no mistake in executing a routine stoppage win and can now look towards a unification with IBF champion Mairis Briedis, WBC king Ilunga Makabu or WBA holder Arsen Goulamirian.

Battles of this level, of this importance, are what he is in the sport for.

"I watched these guys and aimed to be at their level one day. That day is here now, so it's time for me to go and execute," he says.

"I'm not calling these guys out just 'cos I want to share a ring with them, I'm calling them out because I want to beat them.

"I don't pinch myself at the prospect of fighting anyone, I'm pinching myself at how it affects other people; fans, family, stuff like that. Okolie's path to pugilistic glory can provide inspiration for many. Nine years ago the future world champion was working in McDonalds at London Victoria train station, flipping burgers and salting chips with no inkling of a professional boxing career on the horizon.

"I wanted to become store manager at the McDonalds I was working at and go on to maybe become a social worker or something like that," The Hackney fighter recalls.

"I hadn't knuckled it down. I'm still happy and thankful that I found boxing.

"It's important to look back, it lets you know the journey you've been on, the steps you've taken and it makes you learn to appreciate it."

It was during one of those fast-food shifts when Okolie's lightbulb moment occurred: Joshua, whose AJBXNG management company he now fights under, claimed gold at the 2012 Olympic Games in London, grabbing the country's attention by edging a hard-fought win over Italy's Roberto Cammarelle in the super-heavyweight final.

His future protege watched the victory unfold at McDonalds and instantly decided to ditch the burgers for a much-meatier profession.

"I watched AJ win the gold on my lunch break. It was super motivating," he says.

"There was obviously Nicola Adams, Luke Campbell, Anthony Ogogo as well, all these guys winning medals at the same time.

"I was on a come-up and it sent me over the edge, it motivated me. I thought, 'Why can't you have this kind of life? Why shouldn't you?'

"And fortunately I stuck to it."

Almost a decade on from that McDonalds brainwave, Okolie, who went on to compete for Team GB at the Rio Games in 2016, is now managed by Joshua after joining forces with his idol early on in his career.

The heavyweight A-lister is usually the one on hand with advice for his younger charge, but after surrendering his crown to Usyk that no longer appears the case. "I've spoken to him a couple of times since the defeat," Okolie reveals. "He's in good spirits. He's pumped and ready to go for another one.

"He was beaten by the better man on that particular night, but I believe AJ has the ability to beat Usyk in the rematch.

"He needs to impose his strength and control the distance. Also, punch with him. Whenever he throws a shot, throw with him.

"Jab at his chest and stick to your game plan, no matter what he's doing."

For now Okolie's sights are set solely on his 200lbs rivals, particularly Breidis. The three-time world champion, he says, would provide his sternest challenge at cruiserweight.

However, Joshua may soon be joined by his apprentice in the heavyweight ranks, as the McDonalds employee turned fighter has plans to step up into boxing's flagship division once cruiserweight supremacy is secured.

"I think it will be at least a year before I move up to heavyweight," Okolie predicts.

"If I get the three fights that I want and I take out all the champions one by one, I'll be there in about a year."

Okolie was speaking to Daily Star Sport as part of McDonalds' Plan for Change campaign, which will aim to ensure youth worker and services are connected to every community by 2024.

The project will also create 3,000 new apprenticeship roles by 2025 and help one million people open doors to jobs by 2030.

“Working at McDonald’s gave me not just stability and direction but opportunities and training too," Okolie said.

"I would honestly say it was one of the best times of my life, working with my brother, making friends I am still close with and learning things like punctuality, confidence and respect.

"It was there I watched Anthony Joshua win at the 2012 Olympics whilst on a break in the crew room, which inspired me to start training and dream big. Anything is possible if you work hard enough and I encourage all young people to believe in themselves”.

World Champion Boxer Lawrence Okolie has teamed up with McDonald’s to launch a new campaign designed to improve the life chances of thousands of young people. To find out more, visit mcdonalds.co.uk/planforchange