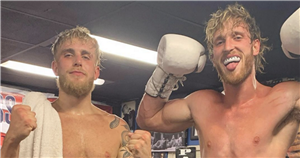 The 'pound-for-pound-king' Saul 'Canelo' Alvarez has warned that both Logan and Jake Paul could end up being 'killed' in the ring should they continue to pursue their respective boxing careers.

The pair started at charity events, where they fought against fellow influencers – however, they have since been looking for professional fights.

Jake, the younger of the two, managed to knock out former-MMA fighter Ben Askren in brutal fashion during the first round last month.

And not to be overshadowed by his younger sibling Logan is set to face off with the undefeated Floyd 'Money' Mayweather in an exhibition bout this June. However, Alvarez has warned it could lead to grave consequences.

“They give them boxer’s licences [boxing's athletic commissions] when they’re not a boxer." The Mexican told American journalist Graham Bensinger on his YouTube channel. "If there’s a death, the commission will be responsible. Why? Because they issued the licence for the fight, this is a very risky sport, and if you go up there, it’s very risky."

Alvarez is currently preparing for a super-middleweight unification bout with Billy Joe Saunders, and the WBA, WBC, WBO and The Ring titles are all on the line.