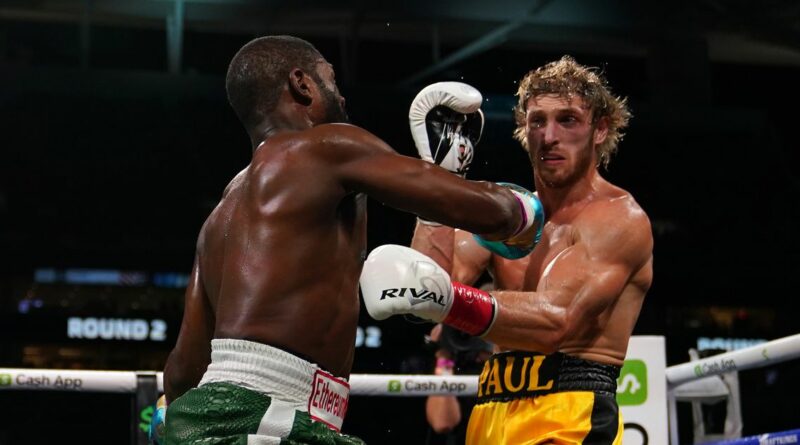 Logan Paul celebrated a moral victory as he heard the final bell against Floyd Mayweather.

Although he never threatened the ring legend, Paul used his size advantage to good effect to complete all eight rounds.

He clung on for large periods of the fight as Mayweather struggled to find space to unleash his shots.

"I had fun. You've got to realise I'm not 21 anymore," Mayweather said after the final bell. "He's better than I thought he was.

"He's a tough, rough competitor and I was surprised by him. He knew how to use his weight and tie me up."

Paul had only one 'professional' fight on his record having lost to social media rival KSI in 2019.

Mayweather was not putting his pristine professional record on the line having extended it to 50-0 with victory over Conor McGregor four years ago.

He started slowly, allowing Paul to push forward but without every allowing the younger man to connect.

Mayweather upped the ante in the middle rounds as he began to catch Paul as the 26-year-old began to cling on.

He clinched whenever he could which frustrated Mayweather and prevented him securing the knockout he had promised.

Paul was even able to showboat in the dying seconds of the fight as the bell went to signal a moral victory.

"I don't want anyone to tell me anything is impossible ever again," said Paul afterwards. "Everyone has it in them

"Floyd Mayweather, it was an honour. "You never know with this guy, I'm going to go home thinking, 'Did Floyd let me survive?.'

"This is the coolest thing ever."

On the undercard, former NFL star Chad Johnson was knocked down in the fourth and final round of his exhibition bout with Brian Maxwell.

Johnson, who was making his debut, dominated the rest of the fight but there was no winner announced following the final bell.

Hurd was expected to win comfortably en-route to another title shot but was dominated over large periods as Arias edged a split decision.

Badou Jack had been slated to rematch light-heavyweight world champion Jean Pascal but the latter failed a drug test and was replaced by the unbeaten and unknown Dervin Colina.

The Venezuelan was never competitive and was twice deducted a point for holding before being dropped three times as the referee waved the fight off in the fourth session.

Ali's promoter Arum believes he would have STRUGGLED against Fury

Joseph Parker pulls out of Derek Chisora fight due to illness