CONOR McGregor is better known for his foul-mouthed rants and showman style but we got to see a different side of the Irish MMA star — humility.

McGregor took to Instagram to share his thoughts on the fight against Khabib Nurmagomedov at UFC, and he wrote the Russian beat him “fair and square”.

The fourth-round chokehold was a stunning result in the highly anticipated bout but it was overshadowed by the infamous aftermath, in which Khabib leapt from the octagon to take on McGregor’s corner.

It has led both fighters into a 10-day suspension ahead of the October 25th (AEST) meeting of the Nevada Athletic Commission which will determine whether the pair’s suspensions will be extended.

However, McGregor was surprisingly humble about the defeat in stark contrast to the war of words he flung prior to the fight.

When McGregor tapped out in the fourth round, the three judges each had Khabib leading 29-27.

Here’s the scorecard for Khabib Nurmagomedov vs. Conor McGregor before the fight was finished for anyone curious #UFC229 pic.twitter.com/nNPztDjTxG

The fight started with both fighters rejecting the opportunity to tap gloves before Khabib immediately began grappling.

All the judges scored the round 10-9 to Khabib but McGregor thought the round belonged to him despite conceding Khabib had the better position.

“From a fight standpoint the first round is mine. Actual shots landed and a willingness to engage. Straight left early. Knee to the head on the low shot. Elbows in any and all tie up scenarios. Opponent just holding the legs against the fence for almost the entire round.” The second round say one of the biggest moments of the bout, a moment McGregor said changed the fight.

“He is running away around the cage before being blessed with a right hand that changed the course of the round, and the fight.

“It was a nice shot.

“After the shot I bounced back up to engage instantly, but again he dipped under to disengage. That is the sport and it was a smart move that led to a dominant round, so no issue. Well played.”

It was scored 10-8 by all judges and McGregor called it “the worst round of my fight career”.

McGregor admitted he didn’t do any stand up training against the renowned grappler and said it was the big lesson he would take into his next fight, alongside trusting his own attacking grappling.

Round three went to McGregor 10-9 but the fateful fourth round sealed the Russian’s win after he “made a critical error of abandoning my over hook at this crucial time, exposing the back, and I end up beaten fair and square.”

With plenty of talk about a rematch, which McGregor reportedly asked for days after the fight, he is also willing to wait.

“If it is not the rematch right away, no problem.

“I will face the next in line.” 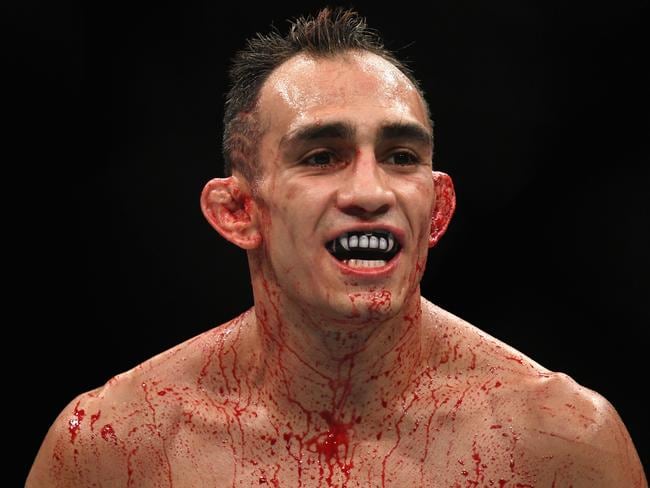 Ferguson fought in the co-main event on the night, defeating Anthony Pettis in two rounds and being caked in his opponents blood after opening a gash early in the fight.

“I haven’t even thought about a [McGregor] rematch,” White said.

“Obviously, I know Conor wants a rematch. We need to do what’s right and what’s fair.

“As a fight fan, you’ve got to go with Tony. Tony had the belt, tweaked his knee, got stripped, this fight happens.

“Tony never lost the [interim] belt in a fight. Neither did Conor, but Conor got the opportunity to actually fight [Nurmagomedov]. I think Tony deserves the next shot.”

“We have bigger fish to fry,” Abdelaziz told ESPN of a rematch.

“He’s (McGregor) in the past, we’ve just moved on. Right now he’s zero, he has no value, we don’t care about him, he can move on, enjoy his life, enjoy his family but he should be ashamed of himself for everything he said.”