The Ukrainian, who has looked a natural since stepping up to the heavyweight division from cruiserweight, overcame Joshua in front of his home crowd via a unanimous points decision.

Usyk certainly didn’t seem fazed fighting in front of 60,000 fans at the Tottenham Hotspur Stadium – with the majority of those lucky to be in attendance backing Joshua.

Usyk found his feet straight away and went on the attack against Joshua as he looked to land an early knockout.

However, the 34-year-old heavyweight admitted his fight plan changed after some unusual advice from his trainer, who told him to fight with caution to gain his biggest victory to date.

“I had no objective to knock him out because my trainer, in my corner, pushed me not to do that,” Usyk revealed to Sky Sports following his triumph in the English capital.

“In the beginning I hit him hard and tried to knock him out. But then my trainer said: ‘Just stop, and do your job’.”

After his headline win on Saturday night, the Ukrainian reached an illustrious milestone, joining only Evander Holyfield and David Haye in becoming a world champion at both cruiserweight and heavyweight level.

While Usyk will be on cloud nine right now, Joshua’s ambitious plans have taken another hit along the road.

It is the second defeat of Joshua’s career, and arguably the biggest now, with his hopes of fighting British heavyweight rival Fury anytime soon slipping away.

His latest setback follows his shock defeat against Andy Ruiz Jr in June 2019, his first fight on away soil in New York.

And following defeat to Usyk, having lost his WBA, WBO and IBF heavyweight belts, he has been given some crucial advice by former British heavyweight champion Lennox Lewis.

Lewis was watching Saturday’s fight closely and has since advised Joshua to go on the attack sooner and get rid of his tentative approach to big fights.

Lewis wrote on Twitter: “Gotta give it up to @usykaa on a great tactical performance tonight.

“For @anthonyjoshua it’s not the end of the road, but u can’t be so tentative or wait till the 8th round to turn it on. Learn from this and improve.”

Katie Taylor could pinch herself closing in on undisputed greatness 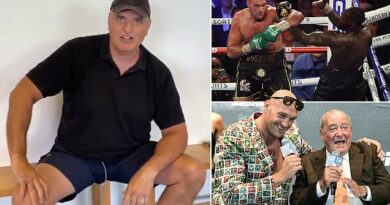