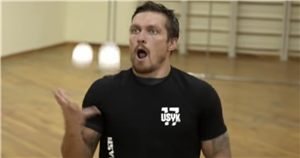 Anthony Joshua will be up against one of boxing's most eccentric characters when he locks horns with Oleksandr Usyk on September 25.

Joshua is set to defend his unified heavyweight titles against the Ukrainian, who became an undisputed champion down at cruiserweight before making the move up.

Many regard Usyk as a top 10 pound-for-pound fighter on the back of his breathtaking performances and unique achievements down at 200lbs, meaning AJ must gear up for perhaps the toughest bout of his career to date.

But not only is his upcoming opponent a masterful mover in the ring, he is also a brilliantly unconventional character who will be difficult to break from a mental point of view.

Born in Simferopol on 17 January 1987, Usyk first ventured into football as a youngster before making the switch to boxing at the age of 15.

It's fair to say he never looked back; going on to carve out the most decorated of amateur careers with gold medal victories at the Olympics Games, World Championships and European Championships before turning professional in 2013 at the age of 26.

He retired from amateur boxing with a highly impressive 335-15 record.

Do you think Oleksandr Usyk will beat Anthony Joshua on September 25? Let us know your thoughts on the fight in the comments section below.

After moving into the pro ranks Usyk took to his ascent through the cruiserweight scene like a duck to water, winning a world title in just his 10th contest and then unifying the division four fights later.

The defining outing of his career so far came in his 15th bout, when he completely outclassed fearsome Russian Murat Gassiev to become undisputed champion and win the World Boxing Super Series tournament.

In what was billed as an evenly matched encounter between the world's top two cruiserweights, Usyk boxed rings around Gassiev, jabbing and weaving his way to the silkiest of points victories to confirm his supremacy at the weight.

The slick footwork and flawless technique which has propelled him to boxing's summit comes not only from blood, sweat and tears in the gym, but also from a number of cognitive exercises designed to train the mind.

Both Usyk and stablemate Vasiliy Lomachenko, considered the best pound-for-pound fighter in the world not too long ago, are trained by the latter's father Anatoly, who puts his fighters through brain-training sessions as well as physical work.

The Ukrainian duo are often seen solving number grids and puzzles, completing tower-block games and juggling balls when in training camp, creative exercises which keep them on the top of their game mentally ahead of big fights.

And while Lomachenko is somewhat of a silent assassin who maintains an intimidating focus before going into battle, Usyk has become a cult hero amongst die-hard boxing fans on the back of some iconic soundbites and wacky moments.

Ahead of his final cruiserweight outing against Tony Bellew in November 2018, which he won via knockout, the wizard-like pugilist was captured by Sky Sports pulling off some hilarious dance moves in the gym.

And his iconically baffling quote "I am feel" has almost become his catchphrase in recent years.

Thus, it will be near impossible for Joshua to mentally derail a man who simply doesn't seem fazed by any challenge that awaits him inside the squared circle.

His heavyweight credentials have been questioned after he laboured to wins over Chazz Witherspoon and Dereck Chisora in his first two outings, a pair of opponents he was expected to dispatch with ease.

Yet in typical Usyk fashion, he has delivered an eerie warning to AJ ahead of their bout on September 25, simply saying: “The path will be mastered by the walking one.”