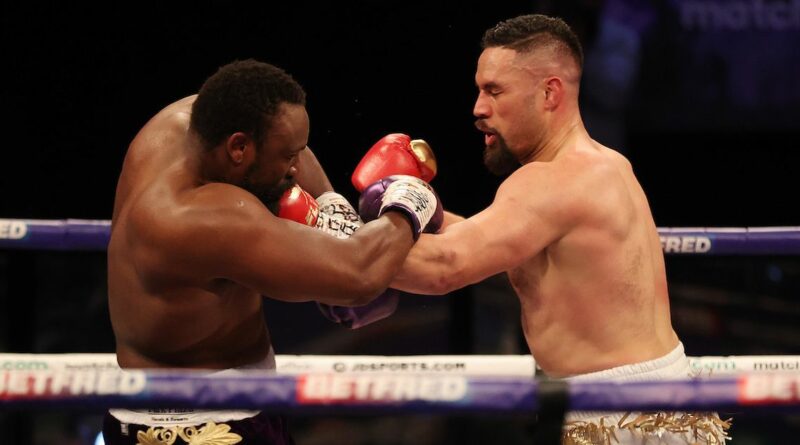 Derek Chisora suffered yet another defeat as he was outpointed by Joseph Parker.

That's now 11 losses in what has been a topsy-turvy 14 years in the professional ranks for the battled-hardened Brit.

Yet, even at 37, he refuses to retire but surely the big pay-per-view pay days for him will now disappear.

Parker wasn't brilliant but he battled back into the bout after a flash knockdown in the first round put Chisora on the front foot.

The Kiwi edged it on the scorecards after dealing with the marauding Chisora, who tired badly as it went on.

But Parker will know he will have to be much better than this if he is to become a world champion again.

There is certainly work to do with new trainer Andy Lee.

Their partnership almost started in disaster as the first punch of the fight put Parker down after just eight seconds.

The Kiwi didn't seem too flustered while Chisora chugged forward .

Parker buzzed his rival with a right of his own before the bell.

It was a thrilling opening three minutes but the pace slowed considerably in the second.

Chisora, with a new coach in Buddy McGirt, rattled through with a right at the start of the third.

Del Boy's work was wild but he was still landing with Parker not deterring his rival.

He did have success with a left hook at the end of the third.

The same shot was landing in the fourth.

Despite his change of trainer, this was the same old Chisora lumbering forward with big whipping shots to the body and overhand rights.

Yet it was still working.

Parker wasn't active enough but when he did let combinations go they landed.

It was an intriguing fight but it was also an example that these two have fallen behind the best in the division.

It got sloppier and it went through the halfway stage.

Chisora, even at 37, refuses to even consider retirement it seems.

A right from Parker put him on the back foot and the same shot rocked him in the eighth.

The fight was swinging the way of the Kiwi as Chisora tired and a right hurt the Brit in the 11th.

Chisora tried to rally in the last round but it wasn't enough to take it on the cards.