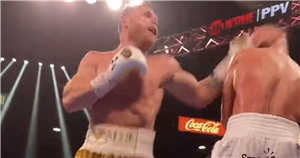 The devastating speed and explosive power of Canelo Alvarez is clear for all to see in ringside footage of his knockout win over Caleb Plant on Saturday night.

Alvarez overcame a difficult start in Las Vegas to become the new undisputed super-middleweight champion, slowly and surely breaking his bitter rival down before closing the show emphatically in round 11.

It certainly wasn't plain-sailing for the Mexican, as Plant, who proved a tricky and awkward customer on the night, perhaps should have been rewarded more fittingly on the judges' scorecards, which read 96-94, 98-92 and 97-93 against him at the time of the stoppage.

Nevertheless, the contentious scores were ultimately futile when Alvarez looped in a ferocious left hook which turned Plant's legs to jelly and floored him in the 11th round.

The 29-year-old returned to his feet but failed to recover from the thudding blow, meaning another onslaught from a buoyant Canelo dropped him again, this time to the point of no return.

Do you think Canelo Alvarez is the best fighter in the world? Let us know in the comments section below.

After the fight, broadcasters Showtime posted ringside footage of Canelo's knockout punches on Twitter, showing his frightening power in all its glory.

He first slips a jab before unleashing a rapid hook-cum-uppercut which buckles the knees of Plant, who also ships a body shot before tumbling to the deck.

Stalking him like a merciless predator hunting down his prey, Alvarez then produces a swift one-two to wipe him out on the ropes.

The Guadalajara man is now an undisputed champion at 168lbs after dispatching of IBF holder Plant, whom he subsequently shared a warm embrace with in the ring despite their war of words and fists in the build-up.

“My respect for Caleb Plant. He’s a terrific fighter with a lot of ability," Alvarez said.

According to a PBC spokesperson, via ESPN, Plant was taken to hospital after being knocked out by Alvarez in Sin City.

The crestfallen star was whisked away to the nearby University Medical Center for observation having taken significant punishment in the 11th round. 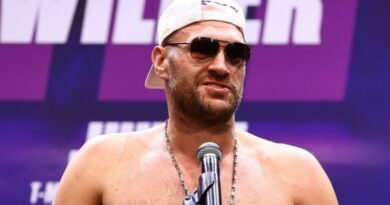