Home » Boxing » Ringside Seat: Could Schwarz be next to shock the world and beat Fury?

That’s a far cry from when he won the championship by decision in a big upset against Wladimir Klitschko in 2015. Despite claiming the lineage and three major title belts in a career-making victory, Fury wasn’t happy at all and did not enjoy the trappings of such success.

The win only accelerated his downward spiral. There was heavy drug abuse and excessive drinking. He ballooned to more than 400 pounds. Severe mental health issues had him on the verge of suicide.

The “Gypsy King” was stripped of his belts — though a fighter cannot lose the lineal title except in the ring, by moving to another weight division or retirement — and was out of the ring, dealing with his issues, for 31 months until returning last June. Fury took on two lesser opponents on the comeback trail, stopping Sefer Seferi in the fourth round and winning a shutout, 10-round decision over Francesco Pianeta.

That set the stage for his epic fight with titlist Deontay Wilder in December in Los Angeles in which Fury showed he was clearly in a better place. He outboxed Wilder for long stretches and overcame two knockdowns, including a pulverizing one in the 12th round that he somehow survived. Fury wound up with a draw, but many thought he deserved to win.

Both men called for an immediate rematch, and one was nearly finalized when Fury and promoter Frank Warren decided to go in a different direction, at least for the time being. Fury instead signed a mega-deal with Top Rank to co-promote him and bring his fights to ESPN platforms.

That deal kicks off with Fury defending the lineal crown against unknown but unbeaten Tom Schwarz on Saturday (ESPN+, 10 p.m. ET, with preliminaries on ESPN2 and ESPN Deportes beginning at 7 p.m. ET) at the MGM Grand Garden Arena, and Fury couldn’t be happier about it.

“I box because I like to keep happy, and it keeps me happy to fight,” Fury, engaging as ever, said this week. “I plan to box until I can’t box anymore. I feel fantastic at the minute. I’m very happy with where I am in my life at the minute. I want to box on. I don’t see myself retiring. I just turned 30 years old. I’ve got over 10 years left in this game, so you’ll have to keep seeing me for the next 10 years, I’m afraid. Keep entertaining, keep putting on great shows.

“The only title that I care about is the lineal championship of the world. It goes back a long, long way, and that’s the one I’m defending with pride and honor.”

Schwarz is getting the opportunity of a lifetime as the hand-picked opponent for the assignment against Fury. He’s thrilled with the shot, excited for his first fight in the United States and aiming for the upset.

“I love Las Vegas. This is a great opportunity for me,” Schwarz said. “I’ll win this fight. I’m ready. My trainers and I have seen every fight of Tyson’s many times. We’ve analyzed his style and have prepared our best strategy. I have a surprise for Tyson Fury, and he will see what it is on Saturday night.”

This is your Ringside Seat for the fight:

Upsets happen in all sports, but a big heavyweight upset is somewhat rare. Still, there was Buster Douglas over Mike Tyson, Hasim Rahman over Lennox Lewis, Leon Spinks over Muhammad Ali, Michael Spinks over Larry Holmes and George Foreman over Michael Moorer, to name a few.

And just two weeks ago, there was another one for the ages, as Andy Ruiz Jr. shockingly scored four knockdowns and stopped Anthony Joshua in the seventh round in New York to take Joshua’s three world title belts in one of the biggest upsets in boxing history.

“I’m fighting for my family and my country. I have a lot of inspiration. I’m ready to shock the world,” Schwarz said. “This is a great time in the heavyweight division, and I am happy to be part of it. On Saturday night, it’s my time. I am prepared. Tyson Fury picked me for a reason, and I promise a great fight, a dramatic fight and a memorable moment for all boxing fans.”

Schwarz also invoked another famous upset authored by his countryman, International Boxing Hall of Famer Max Schmeling, who famously knocked out Joe Louis in upset fashion in the 12th round when they met for the first time, in 1936.

Fury has boxed primarily in his home country of the United Kingdom, but he has also ventured beyond its borders to places such as Germany, for the upset of Klitschko, Canada in 2010 and twice in the United States — New York in 2013 against Steve Cunningham and Los Angeles in the memorable draw with Wilder in December.

But now Fury, arguably boxing’s biggest personality, will have his first fight in the fight capital of the world, Las Vegas, where showmen are all the rage. He had never been to Las Vegas until arriving about a month ago for the second half of his training camp, and he is eager to finally fight in the city that has played host to many of boxing’s biggest fights for decades.

“I made a promise to myself when I was younger: I wouldn’t go to Vegas until I fought there,” Fury said. “It was when I was 14 years old. I always knew I was going to be heavyweight champion of the world. [Sixteen] years later, I get the opportunity to fight on the biggest platform in the world. It’s been a long time coming. I have never been to Vegas.

“The big fights happen in Vegas. I remember waking up to watch Ricky Hatton and Floyd Mayweather [in 2007] at the MGM. A lot of iconic fights have been there, so for me to put my name down on that list is another tick off the list.

“Here it is, it’s finally arose, and I’ve got the opportunity to [fight in Las Vegas], not as a holiday-maker or as a gambler, and headline at a massive casino and hotel.”

Although Fury eschewed the immediate rematch with Wilder by signing with Top Rank and agreeing to fight Schwarz, it turns out the sequel with Wilder is very much part of the plan.

All along, Top Rank chairman Bob Arum said one of the key reasons he wanted to sign Fury and wait for a bit on the rematch was to give Fury a chance to become more known to the American public via ESPN’s widely distributed platforms.

Arum reasoned that with Fury’s huge personality and inspiring story of over overcoming his demons to return to boxing — and at a high level — what sports fan wouldn’t fall in love with him if they got a chance to see him and learn about him?

“We have great fighters on Top Rank ESPN — [Terence] Crawford, [Vasiliy] Lomachenko — but Tyson Fury is something else. He has the ability to capture the imagination of not only boxing fans, but sports fans and also the public at large, and that’s what we hope to accomplish with him,” Arum said. “We’ll give him all the support that we can promotion-wise, but this guy is a force in and of himself in and out of the ring.”

There has been plenty of publicity about Fury as he heads into Saturday’s fight, but two weeks ago, Wilder announced that a deal had been made for he and Fury to meet in a rematch in the first part of 2020, as long as both keep winning; Wilder is due to meet Luis “King Kong” Ortiz in a rematch this fall.

Although all of the details of the rematch have not been spelled out publicly — such as the broadcast arrangements (a significant detail, given that Fury is with ESPN and Wilder is with Premier Boxing Champions, which has deals with Showtime and Fox), date and location — Arum said there is a plan for two more Wilder-Fury fights, meaning they are headed toward an eventual trilogy.

“I didn’t need Ruiz’s upset win to remind me that anything can happen in boxing,” Arum said. “Wilder doesn’t have an easy fight coming up with Ortiz. Ortiz gave him hell the first time they fought. But if both guys go through and Wilder fights Tyson Fury early next year, then because of the controversial results in the first fight, calling it a draw, clearly there would be a market and the demand for a third fight.

“I point out [Muhammad] Ali-[Joe] Frazier, three of the greatest fights in heavyweight history. Ali-[Ken] Norton, three very competitive fights, the first of which Norton won. And there have been others. I would think that there would be a great demand for a trilogy once we got the second fight on.”

Fury, for his part, understandably declined to look ahead and discuss the rematch with Wilder.

“Only thinking about Tom Schwarz at the minute,” Fury said. “So whatever happens in that fight, which I know what’s going to happen, but, you know, we can only look at one appointment at a time. What Wilder is doing is none of my concern, to be honest.” 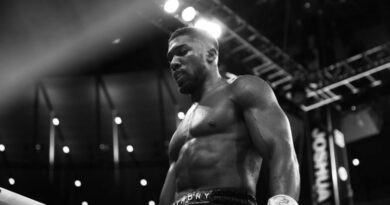