After announcing himself to the United States in a fight-of-the-year contender, Tim Tszyu had a message to the men holding the championship belts he believes will soon be his, Brian Castano and Jermell Charlo.

The pointed comments were a stinging retort to Charlo. The current WBC, WBA and IBF super-welterweight champion couldn’t have been more dismissive of Tszyu’s challenge in June last year when he said: “Tim ‘Kostya’ Tszyu is not on a level to even fight for a world title.

“He ain’t even on the level to fight some of the guys that I’ve knocked the f–k out of and he ain’t even going to get no chance to fight me, probably throughout my career. I’m just being honest with you.” 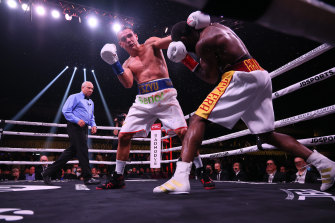 Tim Tszyu has made a statement in and out of the ring.Credit:Getty Images

Tszyu’s American debut almost ended moments after it began when he was dropped in the opening round by Terrell Gausha. However, the Australian climbed off the canvas and dominated his toughest opponent yet to keep his undefeated record intact.

In doing so, he has ensured he is the mandatory challenger to the winner of the Castano-Charlo clash on May 14. The winner of that bout will hold all four belts, and now they are within reach for the “Soul Taker”.

Much of the media attention during his time in the United States has focused on the fact he is the son of the great Kostya Tszyu, the former undisputed champion and Hall of Famer. Tszyu realised this would be the narrative before his first fight on American soil, but told the Herald & The Age before taking on Gausha that he would make a statement in the ring and then straight afterwards.

It came via the comments directed at Charlo, an indication he is forging his own path and identity. Asked if Charlo will know his name when they get into the ring together, Tszyu said: “Of course he will. Now he knows.”

Tszyu is happy to accommodate Charlo or Castano on their own turf, but believes they will be keen to dodge him.

“If you look at Terrell after the fight and the trouble I gave him, they don’t want a piece of this,” he said.

“They want an easy fight where you can box and tip-tap, but that will never happen with me … I’m here and I’m coming for all of them. You are never going to have an easy fight with me, where you think you can come and out-jab me and move around. You’re going to be in for a tough night in the office.”

The 27-year-old struggled with a cold in the lead-up to the fight, an issue that was exacerbated when he flew in from a hot and dry Las Vegas into the sometimes sub-zero temperatures in Minnesota. However, he would not even contemplate pulling out.

“Never. I was in my room figuring my shit out by myself,” he said.

“I didn’t let anyone see. There were nights where I couldn’t even breathe, I was coughing.

“Two days ago. It was the flu, it was just getting worse and worse. When I got to Minnesota, it got worse. ”

Asked what it would have taken to rule him out of the contest, he replied: “If I was dying.”

Adrian Proszenko travelled to the United States to cover the Tim Tszyu fight as a guest of No Limit Boxing. 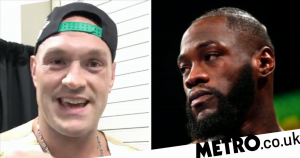