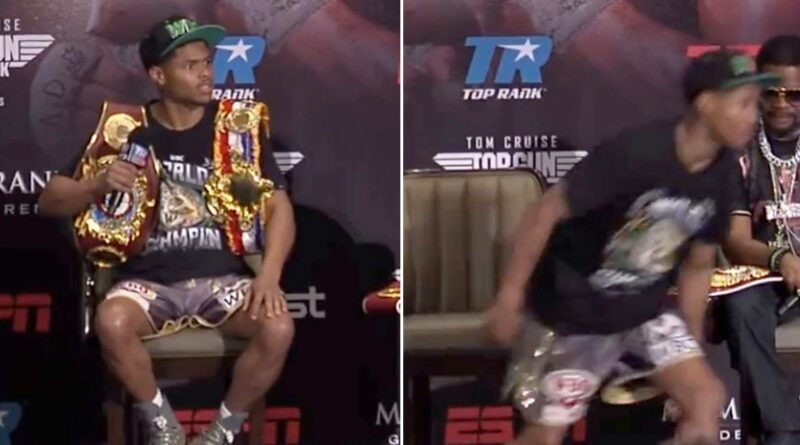 Shakur Stevenson dashed off stage during his post-fight press conference after he outpointed Oscar Valdez as a fight broke out in the MGM Grand.

The American super-featherweight star is believed to have rushed to the aid of his mother, who had been allegedly attacked by two other women amid chaos outside the media room in the hotel. Stevenson, 24, had just beaten Mexican Valdez to add the WBC title to his WBO belt in a one-sided affair in the arena which is situated in the basement of the iconic Las Vegas establishment.

He was answering a question in the media session alongside promoter Bob Arum in the press room when he suddenly dropped both belts and quickly left the stage. A melee had broken out in the casino hall and video later emerged of the scuffle which saw numerous people in Stevenson's team attire involved.

It is not clear if Stevenson himself was involved or if his mother, Malikah, was also still in the scene when the video was captured. MGM security are understood to have gathered Stevenson and some of his team together and kept them in a room until they had cleared the scene.

The hotel is now undergoing an investigation into the matter before it will comment directly. It soured what had been a special night for the Rio 2016 Olympic silver medallist. Stevenson was stepping up in class to take on previously unbeaten Valdez in a big clash at the MGM Grand Garden Arena.

But the New Jersey native made light work of Valdez, who he dominated for 12 rounds before taking a wide unanimous points victory to unify two of the super-featherweight titles and extend his winning record to 18-0.

He then proposed to girlfriend, Young Lyric, in the ring following the victory in front of just over 10,000 fans.

Stevenson – who has also won a world title at featherweight – is now considering whether to go for undisputed glory at super-featherweight or move up to lightweight.

He said: "Oscar Valdez is a tough champion, I don't take nothing away from him. He's rough rugged, got good power and will be a champion after this. I'm a superstar in this sport, line them up and name them, I'm ready for whoever. I might go collect all the belts at 130lbs and become undisputed."

The other champions at super-featherweight are Venezuelan Roger Gutierrez, who holds the WBA, and Japan's IBF champion Kenichi Ogawa. Neither represent big pay days for Stevenson, who is considered the sport's next superstar.

Another option would be to move up to lightweight, where Devin Haney is going to bid to become undisputed champion when he takes on George Kambosos Jr in Australia next month.

Stevenson added: "Devin is definitely a huge fight for me, he's a hell of a fighter. I have got nothing but respect and love for Devin – but we can line it up in the future, too."