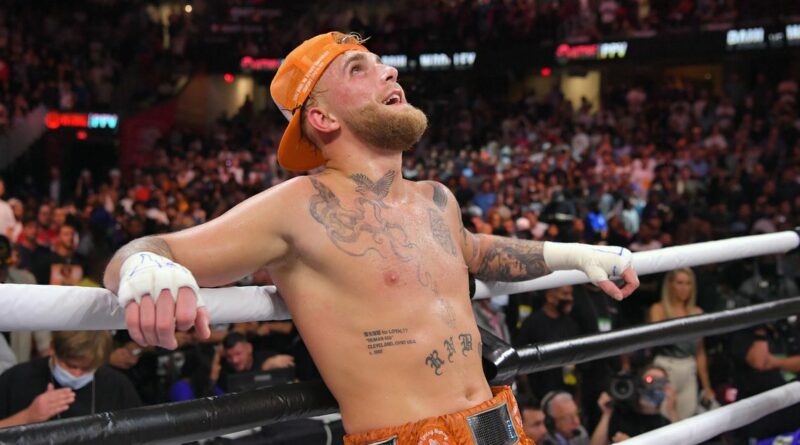 Jake Paul had no sooner had his hand raised after his eight-round clash with Tyron Woodley than speculation began as to his next opponent.

The YouTube star has already faced YouTube star AnEson Gib, Nate Robinson, Ben Askren and now Woodley, and is targeting further big names from the sport of boxing and MMA in crossover contests.

At 24, Paul has already fought in four pay-per-view contests, as he looks to maintain his own set course of becoming a boxing world champion despite the intense criticism from many at his involvement in the sport and the quality of his opponents.

Paul will be keen to add another name to his growing resume and attract the same attention he has done in his previous fights, as he looks to remain undefeated in the professional ranks, and we have taken a look at some of his options…

Paul defeated Woodley last-night in a split-decision victory where he was made to work for his undefeated record, but managed to dominate the stats to get the decision on the scorecards.

Despite dominating large periods of the fight, Paul was caught in the fourth which could have seen a quick end to his undefeated streak but was "held up" by the ropes.

Paul promised Woodley a rematch providing that he keeps his end of the bargain, and gets the tattoo as part of a "bet" made for the loser pre-fight.

This seems a likely option for Paul, as he looks to try and assert his dominance over the former UFC champion again.

The American has been heavily linked with Tyson Fury's younger brother, after the light-heavyweight defeated Anthony Taylor on the undercard of his main-event clash last-night.

Despite gaining a comfortable decision victory, Paul was unimpressed with Fury's victory labelling the performance 'mediocre' as the young fighter was unable to force a stoppage.

However the pair clashed in a heated altercation in the hallway after the event, with Fury stating Paul is "scared to fight" after he was held back from the ring by his brother Logan Paul.

This could be an easily made option between the pair to fight, but Paul could pursue other bigger "money" fights if Fury is unable to bring the commercial draw of the likes of Conor McGregor.

The YouTuber pair have had a rivalry ever since KSI fought Paul's brother Logan in a double edition of the clash which ended in a draw followed by a victory for the British star in the second episode back in 2019.

And the pair have clashed ever since including at Paul's first victory over AnEson Gib, in addition to a victory over his brother Deji.

KSI has frequently called for a fight with the Paul brother, but has been out of action as a result of complications due to the coronavirus pandemic, and an injury.

This would be a huge option for the audience draw of two viral YouTuber's, but could be too early to see this one happen as a result of the Briton's current inactivity, who has been linked with a comeback bout against Austin McBroom.

Paul included Nate Diaz on his boxing 'hit-list' after the pair have regularly engaged in spats during the YouTube star's time in boxing so far.

Diaz has labelled him one of the Paul "sisters" ahead of the fight and criticised his boxing ability after he secured his split-decision victory over Woodley stating that "he sucks".

The American UFC star is looking to bounce back from his recent defeat to Leon Edwards in the cage, so could eye a return to the UFC in December after being heavily linked with former two-time rival Conor McGregor.

And Paul immediately responded stating that Diaz just wants a "payday" after his latest tweet, but a meeting in Paul's next fight seems relatively unlikely between the pair, but the rivalry will no doubt continue during his progress.

The "massive" fight that Paul has previously labelled during his time in the sport, especially as McGregor's future in MMA remains uncertain after his third defeat in four fights.

A huge star globally, the Irishman is no stranger to the boxing ring taking on Floyd Mayweather in a super-fight back in 2017, which did huge pay-per-view numbers and provided huge commercial draw.

Paul spoke about the fight after his victory over Woodley, calling for McGregor to "sober up" so that they can face-off after the Irish star tweeted that he was "salivating" watching the contest.

The YouTube star has already built a rivalry with various social media spats with the Irishman, so could well face McGregor in the future but seems unlikely in his next fight due to the Irishman's ongoing recovery from a broken leg injury.

Paul labelled Masvidal an "airhead" in recent weeks and called out the current UFC welterweight despite the pair previously having a good friendship which appears to have soured.

'Gamebred' has recently been defeated by Kamaru Usman in the second round of their second bout, but has spoken about his plans to try and return to the top of the UFC and fight in any fight that gives him access to a "title shot".

However Masvidal has previously spoken about his desire to fight in the boxing ring one day, and could make an appearance in the iron square.

But for now although it seems a potential option for Jake Paul, it seems highly unlikely that the bout will take place any time soon.

Andy Ruiz Jr. admits he gained too much weight in loss to Anthony Joshua: ‘I didn’t prepare how I should have’