Home » Boxing » Skin in the game: Why rising boxer Harry Garside has icons tattooed on his leg

Harry Garside’s impressive art collection should be framed and hung on a wall. Instead, his gallery is his right leg.

That’s exactly where the 24-year-old boxer, who became a cult figure during the Tokyo Olympics, wants it; nice and close so he can draw inspiration from it whenever necessary. 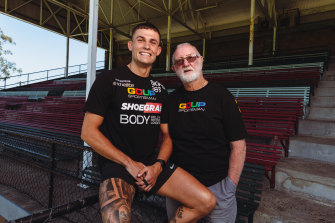 Garside wasn’t just the man who claimed Australia’s first boxing medal at the Olympics in 33 years with bronze in the lightweight division — he captured the nation’s imagination with his infectious passion for his craft.

The fire in Garside is reflected in the six fighters tattooed on his leg, all of which were done in 2019 by his Balinese friend and tattoo artist Dewa Koko.

You have to be more than a fighter to get on Garside’s leg, though. 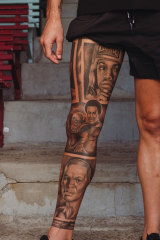 Close up of Harry Garside’s leg, which features tattooed portraits of his favourite boxers.Credit:James Brickwood

“Mayweather beat up his partner — I’m not supporting that either. They were two unbelievable athletes but the people on my leg I admire for being good humans as well as good athletes.”

Garside tells me this in the sun at Erskineville Oval earlier this week. Standing to one side is the suburban ground’s spiritual leader, Hall of Fame trainer Johnny Lewis, 77, who has come out of retirement to mentor Garside alongside accomplished trainer Jayson Laing.

The young boxer has the first bout of his professional career when he takes on Fijian southpaw Sachin Mudaliar (9-1, 1KO) on the undercard of the fight between former footballers Paul Gallen and Darcy Lussick at The Star on Wednesday night.

Having prepared six world champions including Jeff Fenech, Kostya Tszyu and Jeff Harding, Lewis understands a boxer’s fists can only take him so far. Character means as much as a knockout punch.

Ahead of his pro debut, Garside talked about the six legends that have helped him this far. 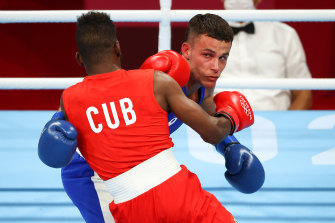 Ali was Garside’s introduction to boxing, through necessity as much as anything else.

“When I started boxing, my parents didn’t know anything about the sport,” he says. “But they knew about Ali because he’s the most famous boxer of all time. From the age of nine, they got me DVDs and books about him, so I did a lot of research. I just loved what he was all about, especially outside the ring. He was more than an athlete because of the things he stood for.” 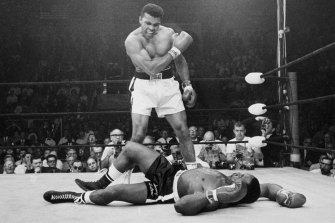 Heavyweight champion Muhammad Ali stands over challenger Sonny Liston after the pair fought for a second time in 1965.Credit:AP

I ask Lewis if Ali was the greatest boxer he’d seen. The response surprises.

“I honestly put Sonny Liston ahead of him,” he says of the man who lost twice to Ali, the second coming in controversial circumstances. “Liston could move. He was up on his toes as much as Ali was. A much strong puncher — and tough. The downside was the mob was all over boxing at that stage. And he was a victim of it.”

The former undisputed middleweight and light heavyweight world champion provided the type of redemptive story only boxing can produce.

“Came from humble beginnings, was locked up and found boxing while he was in jail,” Garside says. “He came out and became one of the most successful boxers of our generation. He boxed into his 50s and still looked very impressive. What I took from him was his mindset: he doesn’t drink, doesn’t eat bad food, doesn’t play up. All young men can take something from him. I know I did.”

One of the greatest middleweight boxers of all time, Leonard made a name for himself against the likes of Marvin Hagler, Tommy Hearns and Roberto Duran in the 1980s. 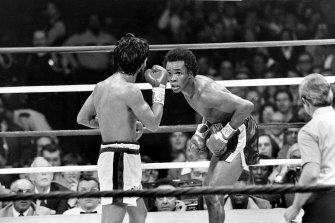 Sugar Ray Leonard taunts at Roberto Duran in the ring in a 1980 championship fight.Credit:AP

“He wasn’t the biggest puncher — and neither am I,” Garside says. “But he showed up and put in the work and that’s something I want to emulate. He kept showing up. He lost the first fight against Duran but then came back to win the second. To fight Hearns, a massive puncher, and then Marvin Hagler … A lot of people thought that last one was a questionable decision, but he was a champion.”

When Danny Green knocked out Roy Jones jnr in December 2009, much of Australia rejoiced. Garside was one of the few who did not.

“I love Australia, but it was heartbreaking when Danny Green brought him over here and he lost in the first round,” he says. “I watched him when I was really young, and to see him get stopped early was tough to see. He was exceptional the way he moved, his flair, the way he kept his hands down, making them look silly. His confidence as well. He just backed himself.”

No boxer has had a greater influence on Garside’s career from afar than the Ukrainian, who had a long amateur career before going pro.

That’s why Garside has two tattoos of Lomachenko on his leg, not just one. 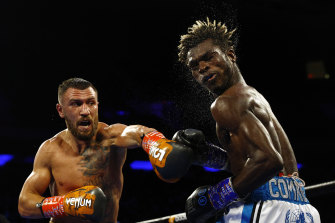 Much was made during the Olympics of how Garside started doing ballet to hone his skills.

“Lomachenko is where I got the inspiration to do that,” he reveals. “He did traditional Ukraine dancing when he was younger. A lot of the things I do for mindset I get from him. At the end of the day, I count from one to 25 on a Schulte table. When you’re tired and exhausted after a big day of training, I still do it because it helps my brain and hands work together as quickly as possible.”

Lewis is adamant that Australia’s latest world champion, George Kambosos jnr, would have Lomachenko’s measure if they ever fight fought — but is pleased Garside looks up to the Ukrainian.

“I love work rate in my fighters,” Lewis says. “Harry was talking about not being a hard puncher. He’ll have a good KO record when it’s all over because of the volume of punches he’ll start throwing.

“He can turn it into a game of chess. Lomachenko optimises that. That was something Kostya could do, too. I’m certain Harry can do the same thing.”

The last fighter Garside added to his leg is American Andre Ward, who shocked the boxing world in 2017 when he retired at the age of 33 at the top of his game. He undefeated having won world titles at super middleweight and light heavyweight. 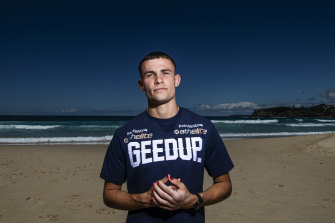 Boxer Harry Garside, the first Australian to win a boxing Olympic medal in decades at the Tokyo Games and is turning professional.TCredit:Louise Kennerley

“His goal was to become an Olympic champion — he did that,” Garside says. “Turn professional with the goal to win a world title — he did that. Then he retired at the top of his game — not many people in boxing get to do that. I respect that. He’s a family man and that was his main reason to retire while on top. He didn’t retire because of embarrassment. He retired when he wanted to.”

“Of all the pictures in Harry’s art gallery, Andre Ward is the bloke I want to see him emulate the most,” he says. “Get out on his terms. Get out 10 fights too early instead of one too late.”

And if Garside does that, if he becomes Lewis’ seventh world champion, will he contemplate making the blank canvas of his left leg a tattooed tribute to himself? 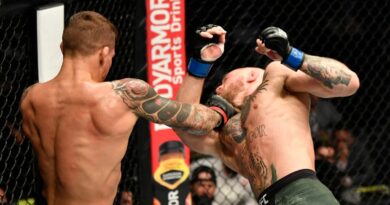 Chris Algieri aims to get back in line for world title shot, preps cookbook release 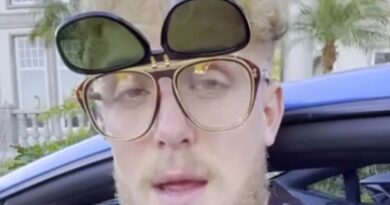