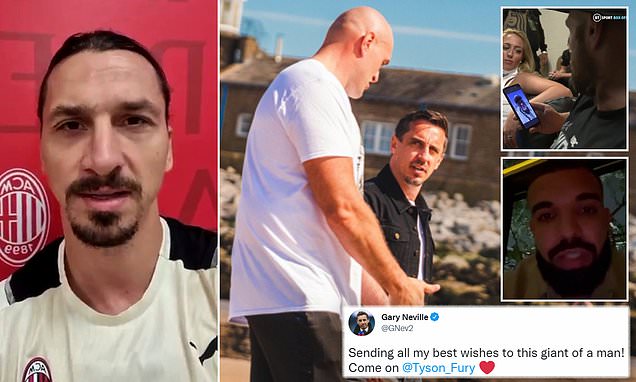 Stars have flooded in with their messages of support for Tyson Fury ahead of his trilogy bout against Deontay Wilder.

The Gypsy King takes on the Bronze Bomber in Las Vegas on Saturday night, with the American keen to exact his revenge after his defeat to Fury in February 2020.

Both men weighed in at the heaviest of their careers for the trilogy bout having bulked up for the big fight. 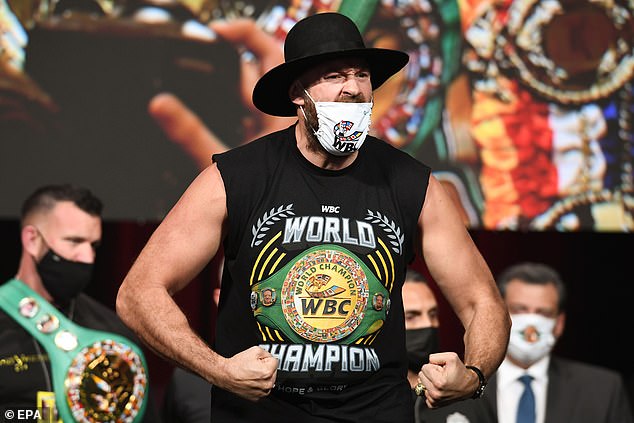 Ahead of the fight, sports stars and celebrities have taken to social media to wish the Gypsy King luck.

Gary Neville who interviewed Fury on his YouTube channel the Overlap, posted a picture of the pair together with the caption: ‘Sending all my best wishes to this giant of a man! Come on @Tyson_Fury.’

A number of people sent video messages to the Gypsy King offering their support including AC Milan star Zlatan Ibrahimovic. 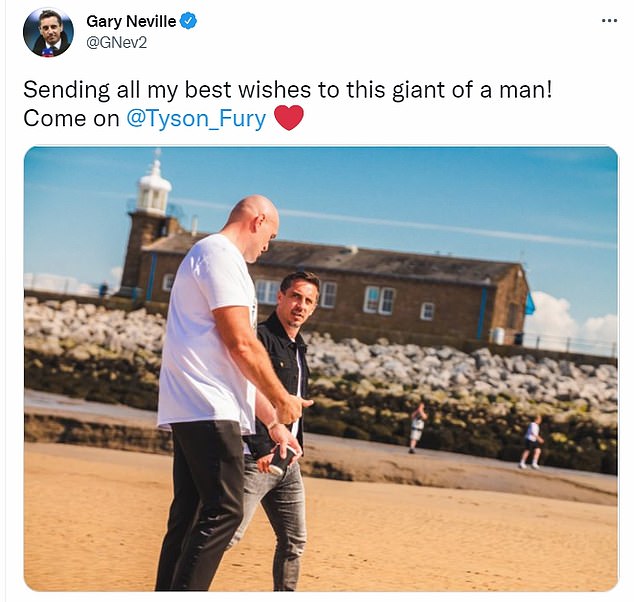 The Swedish striker said: ‘Tyson Fury my friend what’s up. I hope you’re well, I hope the camp went well. I hope your family is well and I hope everything is like it should be.

‘I want to wish you big luck even if you don’t need it – you’re on that level. Keep making history and people admire you, you’re an inspiration for everybody so keep doing what you’re doing and be yourself.

‘Do me a favour, just go out there and dance in the ring and do what you have to do. Take the belt home and keep going, keep striving, keep pushing.’ 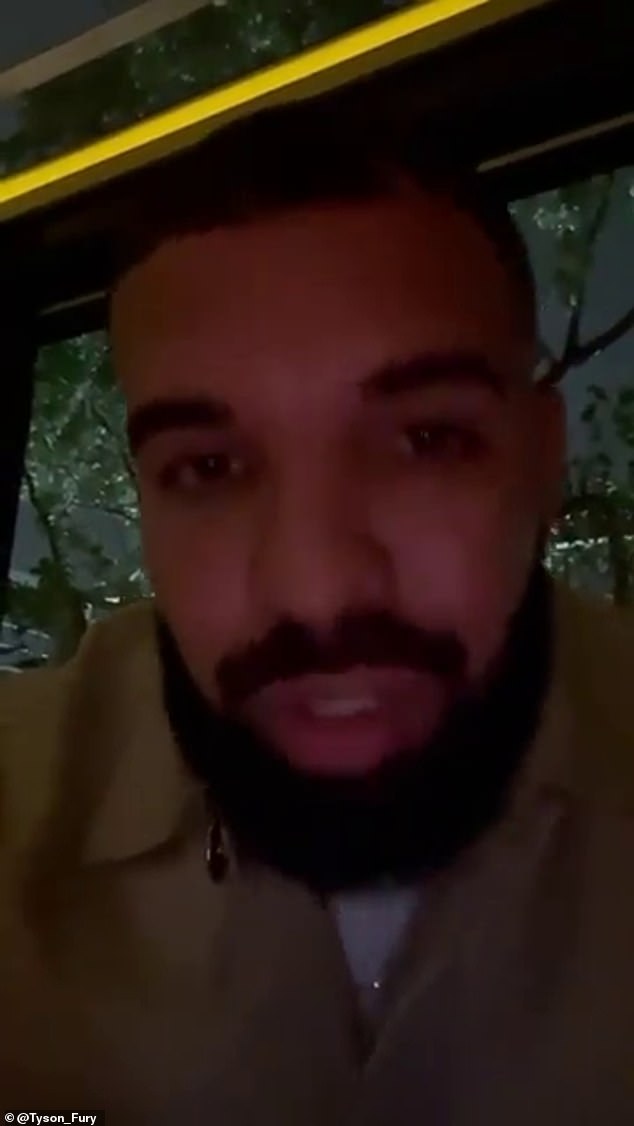 Stars including Drake, Zlatan Ibrahimovic and The Undertaker sent video messages to Fury

Another person to send a video message was one of the biggest musicians in the world and friend Drake, who said: ‘This is a video for the most psycho man that I know. He’s mad in the head but has the purest heart, nicest guy, the Gypsy King.

‘Scariest man in boxing. I wish you the best of luck this weekend brother. I want you to go out there, continue the legacy, do what you do.

‘So go out there and get the word done and then sing your heart out and say whatever the f*** you want to say.

‘We’re all so proud of you, we love you, I appreciate you always staying in contact with me. I appreciate the encouragement and inspiration. I’m looking forward to seeing the end result, wishing you the best always.’

Fury responded to Drake with a message saying: ‘Trust me @Drake, once I’m done with him he’ll be running through Alabama with his woes. God Bless G.’ 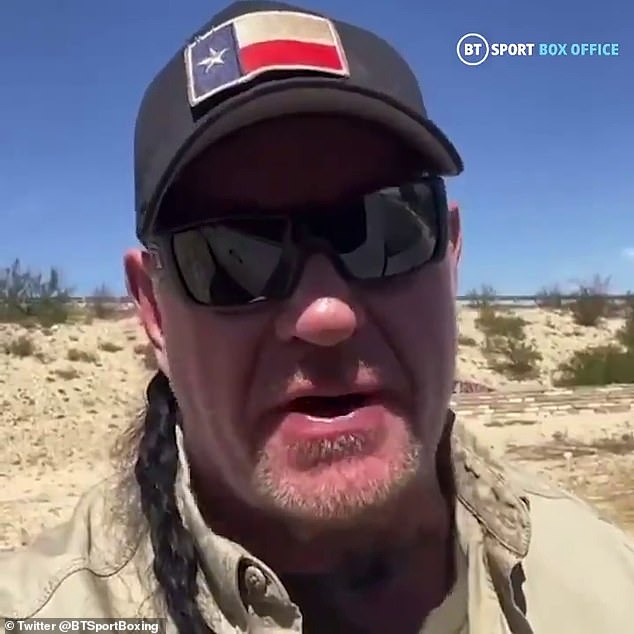 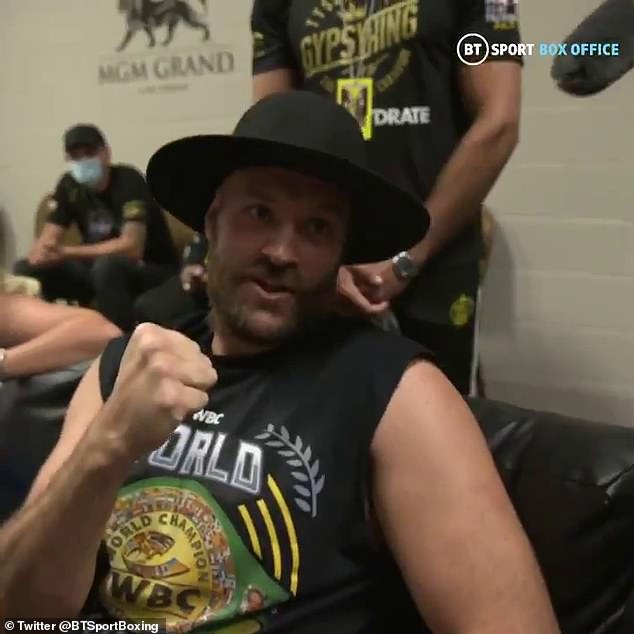 BT Sport posted a video which shows Fury watching a message he received from WWE Legend The Undertaker, who told the Gypsy King: ‘I just wanted to reach out and wish you good luck on the fight, not that you need it.

‘You’ve already smashed this guy really properly and I have no doubt you’re going to do it again.

‘I just wanted you to know, I’m going to be watching and I want to see you drop this guy one more time.

‘You smash this guy and when you’re looking over him just for me look down at him and say ‘rest in peace’. 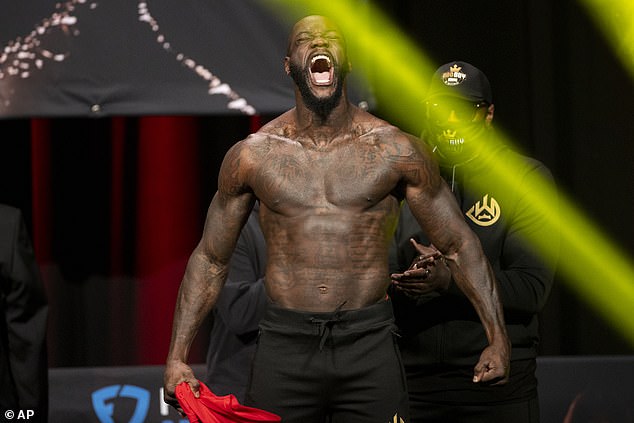 Frank Bruno wrote a message saying that he was confident that the Brit would once again walk out with the victory as he wrote: ‘Morning Big fight day I’m not sitting on the fence @Tyson_Fury 2 win not sure how & when hope knockout early then maybe a song.’

Vinnie Jones sent a video message to Fury saying: ‘Tyson hope you win on Saturday night son. We’ll all be rooting for ya, you know I’ve been there for the last two fights in your corner.

‘I know you’re going to knock him out again. You’ve got the whole country behind you son. Go get him.’