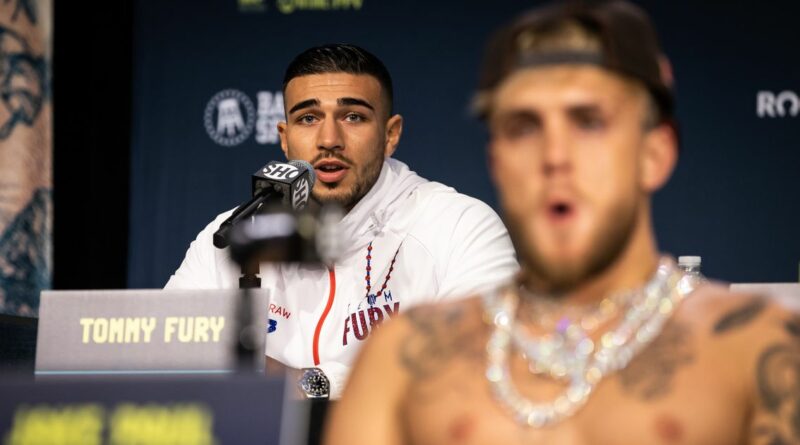 Love Island star Fury failed to impress in his four-round decision win over MMA veteran Anthony Taylor, but clashed with Paul in a backstage confrontation that was caught on camera.

And despite his poor showing against Taylor, whom he couldn't even wobble after declaring he would stop him within a round, Paul's coach believes Fury is still on the radar.

"I didn't expect much out of Tommy to be honest," Flores told Mirror Fighting .

"Anthony [Taylor] can make people look bad, and look he didn't do enough to win rounds but he made it competitive and I didn't really expect much from Tommy anyway.

"Everybody's on Tommy's nuts but I didn't expect too much from him, he didn't have the amateur career and it's tough to go out there and perform.

"It's not easy and people don't realise how tough it is.

"He could still be a potential opponent, he's somebody we could definitely fight, we'll see.

"We'll see what happens, I'll let Nakisa [Bidarian, Paul's manager] work on that, I let him handle that side of things.

"We talk about it, but he comes up with better ideas than I do!"

Flores is currently taking some time off in his Miami home, with Paul's entire team briefly splitting up for a rest period.

But he will return to Puerto Rico, where Paul and his older brother Logan are based, and believes that it is still possible that the YouTuber fights for a third time this year.

Paul joked that he was "retired" from boxing earlier in the week, but quickly "returned" in a tweet just hours later.

"He's already ready to come back," Flores explained. "This guy is a serious kid, trust me, he's very, very serious."

Asked if Paul would hold off until next year for his fifth professional fight, Flores said that it was unlikely that he would take that amount of time out of the ring.

"He won't take that much time off," Flores assured. "The guy is obsessed, he loves boxing.

"He won't take much time off at all, he'll want to be back sooner than [next year], and we really need to.

"We've got a lot of momentum right now, a lot of things we can improve on and work on, we just need to get back to the drawing board.

"It's obviously a work in progress, so we need to keep working and stay focused, that's kind of our mentality in our camp.

"We're always getting better, we're always improving, and we don't feel like we can afford to take months off and sit around."

And in terms of Paul's next test, Flores believes that it is not something that is imminently on the cards

"Nobody wants to see it," he said. "It was a good fight, six rounds to two, it wasn't really that close but Tyron was tough.

"I give him credit for that, he got his payday and now he's trying to say all kind of stuff but it's just excuses.

"I always said before the fight that there better be no excuses after the fight, I don't want to hear about it.

"Floyd Mayweather was training with him, Gerald Tucker, Pedro Diaz all those great people in his corner, all the work, all the sacrifices.

"That's cool but no excuses after the fight though, because I knew Jake was going to beat him."

JEFF POWELL: Whyte given a shot at redemption with his rematch clause