Tony Bellew has put his name forward to fight the winner of the KSI vs Logan Paul rematch – for “a million dollars”.

KSI and Paul rematch on Saturday in Los Angeles after their first bout at Manchester Arena last August ended in a draw.

This time around the contest is a professional one with no headguards and smaller boxing gloves.

The fight is taking place in the cruiserweight division and is scheduled to last six rounds.

While both YouTube stars have bigged up the idea, it is not clear whether or not they will pursue a career in boxing once this fight is over.

Logan Paul recently raised eyebrows by claiming he can become the heavyweight champion of the world if he decides to continue his boxing journey after the KSI bout.

“If I want to carry on boxing and become a champion then I don’t see why I can’t,” he said ahead of the fight.

“People will just have to watch the fight on Saturday to realise I am actually a pretty good f****** boxer and I think a lot of my fans want to see me take that route.

“Fighting is fun but it is also dangerous so I just have to weigh-up the risk and reward.”

But if they do decide to give the sport a real go, former world cruiserweight champion Bellew says he would like to get involved.

Speaking recently ahead of the fight, Bellew said: “You can’t knock it, you’ve gotta give them fair play and credit for doing it.

“But to start saying it’s the future of boxing, give me a break, don’t talk nonsense…

“I’m not gonna lie to you guys, it’s probably gonna do more buys than 90 per cent of pay-per-views.

“For a million dollars I’ll fight the two of them at once.”

Bellew, 36, bought his boxing career to an end last year after losing to Oleksandr Usyk.

Many boxing enthusiasts would still back to Liverpudlian to beat the winner of KSI and Logan Paul. 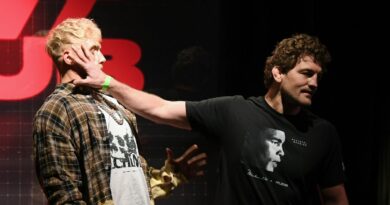