Former cruiserweight world champion Tony Bellew admitted he knew he was the underdog against Oleksandr Usyk but wanted the challenge anyway.

The Liverpudlian put his WBC cruiserweight world championship on the line when he faced the imperious Ukrainian for the undisputed cruiserweight championship in 2018. At the time, Bellew was fresh off beating David Haye by a TKO in the fifth round six months previously.

Bellew was also coming to the very end of his fantastic career, while Usyk was enjoying a winning streak he has managed to maintain. But while Bellew admitted he was contemplating retirement at the time, he could not resist the opportunity of taking on Usyk, in a bid to become the first ever Briton to hold four world titles in a weight division.

“First of all I was chasing a world title. I got the world title,” Bellew said, exclusively to Daily Star Sport, while promoting his podcast 'Tony Bellew is Angry'. “Then I thought ‘right, I need to chase the money’. I got the money.

“I thought, ‘why am I still fighting?’ Then the challenge from Oleksandr Usyk came. I took the challenge and thought, ‘If I can win the belts, then I can, I can, but if I can’t, I can’t’.

What was your favourite moment of Tony Bellew's iconic boxing career? Let us know in the comments section below

“I always knew he was better than me, but I thought ‘maybe I can beat him on the night’. That didn’t work out, but I was happy. I was happy with the performance. I was proud that I went out and faced the very best that there is.”

In the early rounds, Bellew kept the Ukrainian at bay with his powerful counter punching. However, a solid left hook to Bellew’s face in the fourth round saw the momentum swing back towards Usyk.

Bellew’s resolute and determined battle with the now WBA, WBO, and IBF titles heavyweight champion was ended by a powerful left hook to the face in the eighth round. The Bomber confirmed his retirement in his post fight speech in what must have been an emotional goodbye.

In 2020, while reflecting on their battle in 2018, Usyk also stated Bellew was the toughest opponent he had ever faced at the time. The Ukrainian looks set to take on Tyson Fury for the undisputed heavyweight titles this year in what could be the most anticipated boxing match of the year. 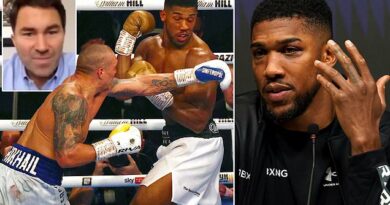 Hearn lets slip that he believes Joshua will LOSE to Usyk