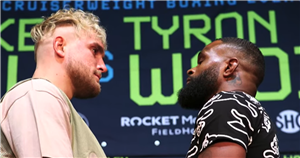 Tyron Woodley offered Jake Paul a sparring match ahead of their official boxing match on August 29.

The pair will meet in the ring for the former UFC welterweight champion's boxing debut next month in Cleveland, Ohio, but he offered to take on Paul after their press conference last night.

They went face-to-face for the official launch event ahead of their pay-per-view bout, which will be the YouTube star's fourth career fight, but Woodley wanted to get even closer.

"Jake, meet me in sparring tonight," he said while they were on stage. "Let's get a warm-up in.

"I guarantee you when we leave the gym, you would never f***ing walk in that ring with me ever, if you're a fighter and it's not about money and clout then meet me in the gym today.

"Holla' at your boy and watch what happens."

Paul responded by telling Woodley that he was "stupid" and listed his world class sparring partners who include J'Leon Love and world champion Jean Pascal. The bout is a considerable step up in class for Paul, who has yet to fight a boxer who wasn't making their professional debut in his young career.

His first professional opponent was YouTube star AnEsonGib, who had fought and won twice at amateur level, but clearly was levels below Paul when they stepped in the ring, losing a first round TKO.

He then fought the wildly inexperienced Nate Robinson in his second bout, who he stopped with a brutal knockout that went viral on social media and earned him a headline bout under the Triller banner.

In his most recent bout, he faced Olympian and former UFC fighter Ben Askren, who had wins over the likes of Robbie Lawlor and Douglas Lima in his MMA career.

But he was always infamous for his inability to adapt to the striking part of the sport, and was stopped within two minutes of his bout with Paul in Atlanta.

Now the YouTube star faces Woodley, a former UFC champion who was known for his striking prowess during his run to and with the belt in the 2010s.

He lost his title to Kamaru Usman in 2019 and then his next three to Gilbert Burns, Colby Covington and Vincente Luque before leaving the promotion and opting to make the switch to boxing.

And the top fighter will make a career-high payday for his bout with Paul, including his six UFC title fights, five of which he entered as champion.

"People know what they'll get when they tune into a Jake Paul event," the YouTube star said at the press conference yesterday.

"That's why I'm the most impactful 3-0 boxer in history, no fighter has ever accomplished what I accomplished in three fights.

"I'm knocking this guy out, that's what people want to see, and we're putting on a show."

The event is being promoted by Paul's 'Most Valuable Promotions' in association with Showtime Boxing in the United States. 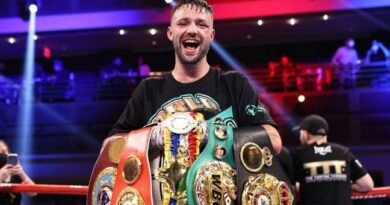 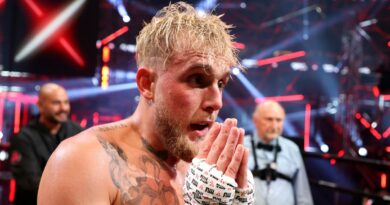