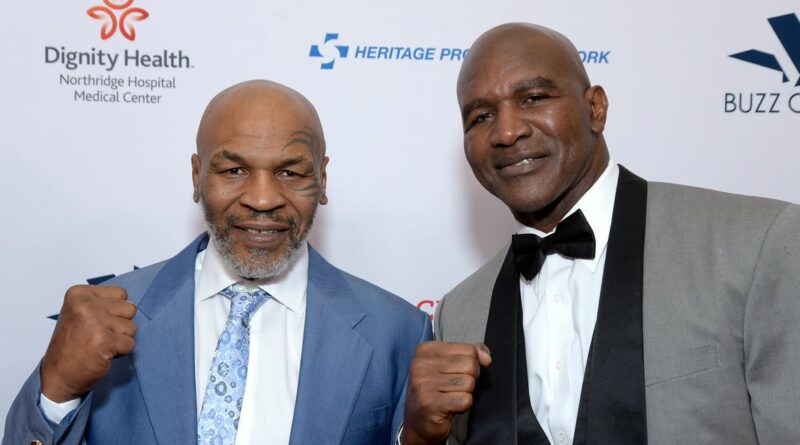 Evander Holyfield has revealed he is in talks with Mike Tyson 's representatives in a bid to secure a trilogy fight with his rival 24 years after their last bout.

The rematch famously ended with Tyson getting disqualified in the third round after biting Holyfield's ear.

Tyson returned to the ring last year for an exhibition boxing bout with Roy Jones Jr in November and the 54-year-old has revealed he is willing to fight again.

Holyfield wants another fight with Tyson and he has revealed that talks are underway, telling the Sun : "People do what they choose to do and for whatever reason they have, they do it.

"The thing is that if it’s meant to be it will happen, either way, it is what it is.

"What I can tell you is that my team is talking to Mike’s management, so I’m waiting for a decision. They are communicating right now.

"The thing is I’m still training for this, I know it will be some day this deal will happen and I’m ready for him. I’m doing OK."

Tyson's bout with Jones Jr is said to have earned 1.6m buys on pay-per-view in America alone, generating at least $80m (£72m) and Holyfield believes a trilogy fight with Tyson could earn up to $200m (£150m).

"My views are you always help people," Holyfield added. "I try to pass on the goodness that was passed onto me.

"Where an opportunity is available, I like to make the best out of what I have. I believe if I fought Mike the fight will generate $200million.

"It will be the biggest fight there is. That’s the honest truth. I think Mike has my message already. If he is going to do it he is, if not then he’s not.

"It’s a decision he has to make now and we both have to be in an agreement.

"I’m not going to tell anybody what I’m going to do – my strategy I’m planning on using against Mike – I don’t want anyone to know.

"I’m happy if Mike fights me."

David Haye: ‘Injury gets very lonely, it’s tough when you can see the rest of the world moving on’