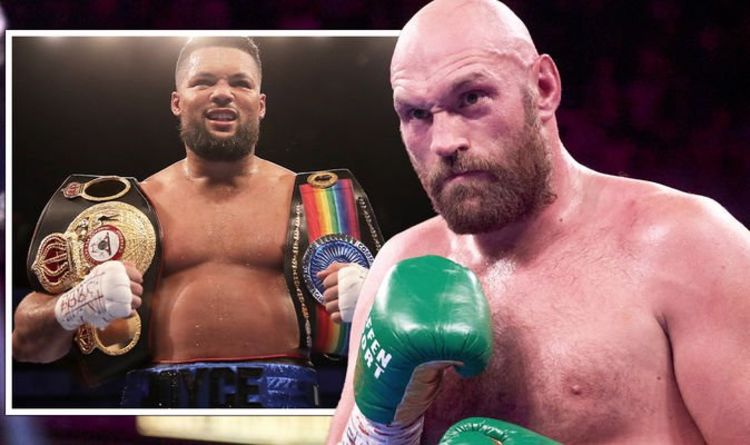 Tyson Fury 'has his mental health under control' says Paris

Tyson Fury has been challenged by undefeated boxer Joe Joyce. The Olympic silver medallist wants to tussle with the Gypsy King in February, after defeating Daniel Dubois and Carlos Takam in his last two fights.

The 36-year-old has the utmost respect for Fury and he posted a photo on Instagram of the pair following a training session.

Joyce has yet to lose a fight and is keen to test himself against the WBC heavyweight champion, who also has an unblemished record.

He wrote: “I have got lots of respect for @gypsyking101 as a friend and as a fighter, but my schedule is free in February #letsdothis #WBO1 #WBC2 #THEJUGGERNAUT.”

Asked by Sky Sports about the possibility of Fury fighting Joyce, promoter Frank Warren said: “I was talking to Tyson about him. Tyson said that he’s the best one out there.

“That’s what Tyson’s opinion was. Can he go all the way? Yes he can. He’s got a good ticker, a big heart.

JUST IN: Tyson Fury’s undisputed hopes take a hit with Anthony Joshua only interested in one fight

“He’s strong, he walks forwards, he is the ‘Juggernaut’. Whoever he’s in there with, you know they will have a problem getting rid of him.

Joyce may have to wait longer for a chance to fight the 33-year-old, as Fury is not expected to return to the ring until March.

Furthermore, he is set to face a frustrating wait for confirmation of his mandatory fight against Dillian Whyte as the WBC failed to order the fight.

Whyte was scheduled to fight Otto Wallin on October 30 – but the bout was cancelled when the Brit was forced to withdraw with a shoulder injury.

It was widely expected that the sanctioning body would officially call for the fight at their convention last week, but it did not take place.

“The WBC have stated at their convention that they cannot order the mandatory as their legal arbitration with Whyte is ongoing and must be resolved first.”

Fury’s US promoter Bob Arum recently told Boxing News 24: “Dillian Whyte is not the mandatory, and that’s what the WBC hasn’t done. Dillian Whyte has an obligation to fight Wallin, and we’ll see.

“But again, in March, I’d like Tyson Fury to fight in the UK.

“And I would think among the opponents would be Dillian Whyte or maybe this big English guy, Joe Joyce.”

Fury has not fought in the UK since 2018 against Francesco Pianeta at Windsor Park.

Fury dominated the fight winning every single round in a convincing points decision victory, handing Pianeta his fifth career loss.