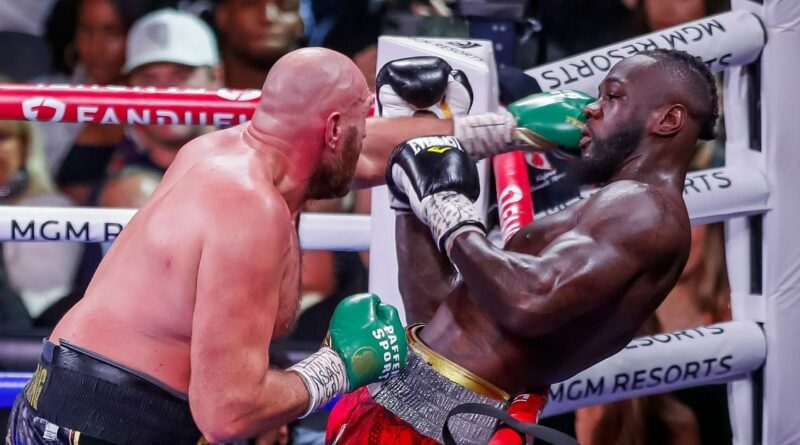 Legendary sports promoter Barry Hearn is unsure if Deontay Wilder will fight again after his knockout loss to Tyson Fury in their trilogy fight.

Fury put a definitive end to his rivalry with Wilder by stopping the American in the 11th round, with referee Russell Mora waving the fight off before Wilder even hit the canvas.

The trilogy was not as one-sided as the pair's second fight, as Wilder had Fury in trouble in the fourth round after knocking him down twice.

But Wilder fatigued in the later rounds and it would be Fury who retained his WBC and Ring magazine titles.

Hearn – who runs Matchroom Sport with his son Eddie – isn't confident Wilder will fight again after his devastating knockout loss.

He told Boxing Social : "Some fight, some fight. It might be the last time we see Deontay Wilder out there. He looked a beaten man mentally and physically on the night, and subsequently the way he's been talking.

"It was a comprehensive demolition job by Tyson. I think most of us predicted a win for Tyson Fury but didn't perhaps see the drama we were going to get. It was a great fight for heavyweight boxing.

"A great fight for Tyson Fury who seems to be so confident he could walk through walls at the moment."

Fury will likely fight the WBC mandatory title challenger Dillian Whyte in December, if the Brit can get past Otto Wallin in their fight on October 30.

Eddie Hearn – who manages Whyte – said Fury vs Whyte would be a "huge event" and he would like it to take place in the UK.

Should Deontay Wilder fight again after being stopped again by Tyson Fury? Let us know in the comments section below

"If Dillian gets the job done at the O2, then we get a massive fight between two Brits for the WBC and Ring magazine titles," Hearn told iFL TV.

"I don't see why Tyson wouldn't want to fight Dillian Whyte. It's a huge payday and massive event."

Fury echoed the words of Barry Hearn and is unsure if Wilder will fight again after his recent loss.

The undefeated Brit also thinks Wilder will come out with excuses for the loss having accused Fury of glove tampering before their second fight.

"I'm sure he'll have a lot of excuses to make. He always does, he's a sore loser and he has Everlast MX on and I had Paffen Sports on, the gloves were the same," Fury told Behind the Gloves.

"His trainers were in the changing rooms yet again, they checked everything, there's no queries. He got beat fair and square and that's all she wrote for Deontay Wilder. And I'll be surprised if he ever boxes again."

Fury's promoter Arum launches boxing's comeback in the US