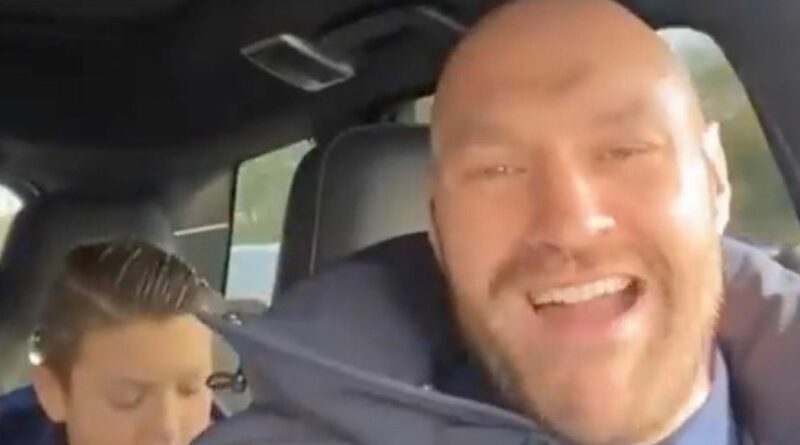 Still lapping up his trilogy fight victory over rival Deontay Wilder, Tyson Fury is continuing to make the most of his precious time off by going to support his beloved Manchester United in their derby against City.

The heavyweight champion of the world posted a video on Twitter of himself with his sons and a friend driving up to Old Trafford for the eagerly-anticipated Premier League encounter.

And Fury was clearly buzzing about the occasion, shouting to camera: "Come on the Reds… we're off to the derby!", while the kids in the back of the car screamed "Come on United."

Fury, who defeated arch rival Wilder with an 11th round stoppage in their thrilling trilogy fight in Las Vegas, will be desperate for United to right their wrongs following their hammering at home to Liverpool last time out at Old Trafford.

Ole Gunnar Solskjaer's side were thrashed 5-0 at home to Liverpool two weekends ago, with Paul Pogba getting sent off as Mohamed Salah ran riot by scoring a hat-trick.

United bounced back with a routine 3-0 win at Tottenham last time out, and Fury's beloved side currently sit fifth in the Premier League, three points off West Ham in fourth.

Ahead of the lunchtime kick-off, Solskjaer was asked if City – who have won three of the last four Premier League titles – could ever eclipse United.

But Solskjaer played mind games ahead of the derby, dismissing the notion emphatically.

"No, I can't see it," Solskjaer said. “You have to have respect for what they've done in the last 10 years, even more so in the last four or five, with how dominant they've been in England and in Europe.

"But we're Manchester United, we're always going to come back. I think we're the No.1 club in Manchester and that also probably means in the world."

Meanwhile, Fury is lapping up his free time away from the ring at the moment, with some big decisions to make.

Fury has pondered retirement since beating Wilder for a second time in their trilogy, but if he decides to continue within the sport, he will likely be ordered to fight WBC mandatory challenger Dillian Whyte next.

However, his UK promoter Frank Warren has admitted that the 'Gypsy King' is his own boss and will decide what the future holds.

"Tyson Fury makes the decisions, he's the guy who's the lineal champion. He's the number one heavyweight in the world and it's his decision, how much he wants to fight for and who he wants to fight," Warren told iFL TV.

"It's not my decision. He's a grown man. What, he's 32 or 33 years of age, he'll make his decision. Of course, I'll advise him what my opinion is as I did when he came and signed with me.

"When we sat down and done our deal originally, I said we'll do four warmup fights and then we'll get him in for a shot at the world title."