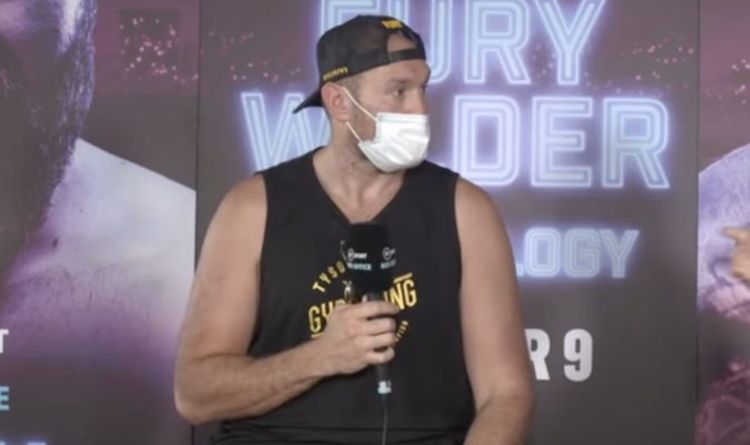 Tyson Fury won’t be getting his second dose of the COVID-19 vaccine before fighting Deontay Wilder. The two-time boxing world heavyweight champion has explained why he’s delaying his second jab amid fears it would affect his performance on fight night in Las Vegas.

Fury and Wilder square off for a third time on October 9, a delayed date after their July 24 bout was postponed due to a coronavirus outbreak in the former’s camp.

Before he contracted the virus, the Gypsy King received his first dose of the vaccine in the summer but refused a second jab over concerns that he’d become sick ahead of the scheduled July bout.

He’s in the same mindset ahead of his crunch clash with Wilder in two weeks’ time and will stay clear of his second vaccine until the aftermath.

JUST IN: Tyson Fury has ‘sneaky feeling’ on Joshua and Usyk heavyweight bout

Fury has detailed why he isn’t risking receiving his second COVID-19 vaccine in the build-up to fight night next month.

He said: “You never can tell [the impact of the vaccine]. There’s so much bulls*** with all this, stories that go around, you never know what’s the truth and what’s not. So, I’m not in the risk-taking game.

“I’m in a serious, life-threatening job, where you can get your lights knocked out with one punch.

“And if [a second shot] was to affect me in any way, then I’d never live with myself before a big fight.

“But when the fight’s over, and it hasn’t affected me, I’ll have time to recover from it all.

“But I wouldn’t go now and have my injection, not knowing what’s going to happen next week because I’ve got much business on.

“So, when the boxing’s over in the minute, I can go and get my vaccine, second shot, and we’ll see how we go from there. But yeah, for now, I’m just gonna stick with one until after the fight.”

Despite his unsurprising reluctance to get jabbed before his trilogy fight with Wilder, Fury has still expressed his commitment to have the vaccine afterwards.

Fury isn’t contractually obliged to have his second dose of the COVID-19 vaccine before fighting Wilder and has urged the public to do their part.

He added: “[COVID-19 has] killed a lot of people in the world, and if the vaccine helps, then get it done, you know?

“I had my first vaccine back in, I think, July or June in Miami. And I was supposed to go back and have another one after the Wilder fight.”