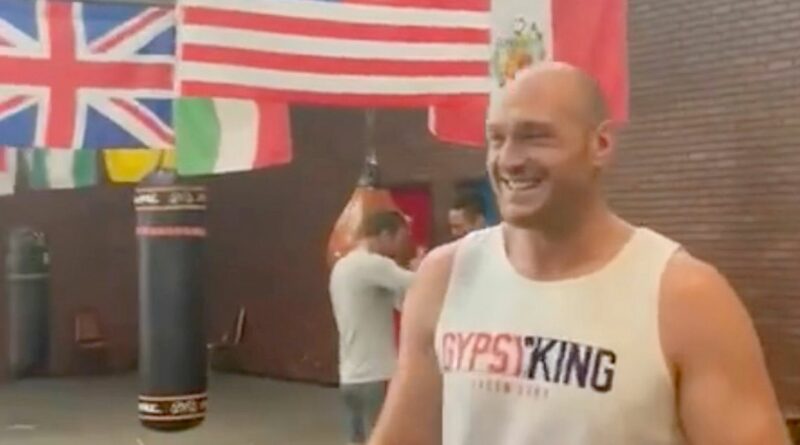 Tyson Fury took a break from training last night to celebrate England’s win over Germany, a victory that sealed the Three Lions’ place in the EURO 2020 quarterfinals.

Fury is in the final stages of training camp ahead of his upcoming trilogy contest against American knockout artist Deontay Wilder, set to take place in Las Vegas next month.

Despite the importance of the clash, Fury does not seem to be letting the pressure get to him and was happy to pause his intense training camp to enjoy England’s victory alongside his coaches and sparring partners, including Hughie Fury, Isaac Lowe, and Joseph Parker.

In fact, the WBC heavyweight champion was the first of his group to burst into song, belting out the famous Baddiel & Skinner tune Three Lions (Football’s Coming Home), before the rest of his team joined in.

Fury vs. Wilder III is set to take place on July 24th at the T-Mobile Arena in Las Vegas, with the WBC and Ring Magazine heavyweight titles on the line.

Ahead of the clash, Fury and Wilder recently met at a press conference. While the Bronze Bomber was unusually reserved at the event, Fury was as bold as ever, telling Wilder exactly what he thought of him, and exactly how he planned to beat him.

Do you think Tyson Fury will defeat Deontay Wilder again next month? Let us know in the comments section below.

“I guarantee you he does not go past where he did before [the 7th round]. Before I had only 5 or 6 weeks of practicing. This time I’ve had 18 months.

“We’ll see on fight night if I can run him over quicker than round 7, and I think I do, for sure.”

The bout comes 17 months after Fury’s stunning seventh-round knockout of Wilder in their 2020 rematch. Neither man has competed since, and the Gypsy King will enter the clash as a heavy favourite.

The event is set to be a night full of heavyweight action, with a handful of other bouts already booked on the undercard. Most notably, Robert Helenius will face Adam Kownacki in their highly anticipated rematch.