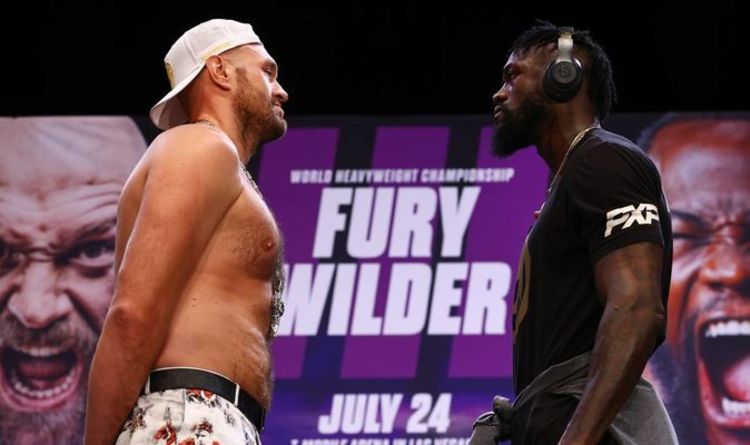 Tyson Fury’s trilogy fight against Deontay Wilder is in serious doubt after a Covid-19 breakout in the Gypsy King’s training camp, reports sugget. Fury was set to meet Wilder on July 24 in Las Vegas, but those plans are now in doubt. ESPN claims the bout could now be moved to September as a result.

Fury was set to defend his WBC heavyweight world championship belt against Wilder in an immediate rematch of their February 2020 bout.

The two met early last year, with the Gypsy King defeating the American by knockout.

Since then, neither has stepped foot in the ring, with Wilder listing a plethora of excuses for his maiden professional defeat.

Plans for Fury to unify the division against Anthony Joshua were in full swing, but had to be scrapped to make way for the Wilder trilogy.

Now, those plans face even further delay, with ESPN reporting that a postponement is inevitable.

Neither camp has made a comment on the report, which states that a Covid-19 outbreak in Fury’s camp has halted his preparations for the fight.

Fury, who is out in American training, has been on a social media blackout in the build-up to the trilogy, instead allowing posts from his official account to be made by members of his team.

But there has been no comment on the rumours of an outbreak, with his most recent post coming after England’s Euro 2020 win over Denmark on Wednesday.

Wilder, on the other hand, has been vocal in the build-up, and has already declared he believes Fury will cheat in order to retain the WBC strap.

The Bronze Bomber has frequently claimed Fury tampered with his gloves in their second fight, and has declared the fight was stopped prematurely, as well as claiming his ring walk attire was too heavy, causing him to be unable to move properly.

Now, he has claimed Fury’s team is preparing a “master plan” to cheat and gain an illegal advantage.

He said this week: “You think he ain’t gonna try to cheat this time? Oh they’re thinking of it, they’re coming up with a master plan.

“They dressed that up… I can’t dress that up no other way, no other gown will fit that woman other than a cheat, that’s it, but when they do that it’s the biggest thing that ever happened in boxing history.

“But I sleep well at night, I’m happy and I’m happy the situation came upon me because it woke me up more than I was already awake and it’s given me a new drive, a different motivation in the sport.”

Brook vs DeLuca: Kell Brook ripped and ready at weigh-in before comeback fight in Sheffield

Who is Agit Kabayel? Everything you need to know about next Tyson Fury opponent